Our First Look At Arrow’s Huntress, Plus Another DC Comics Woman Joins The Cast! 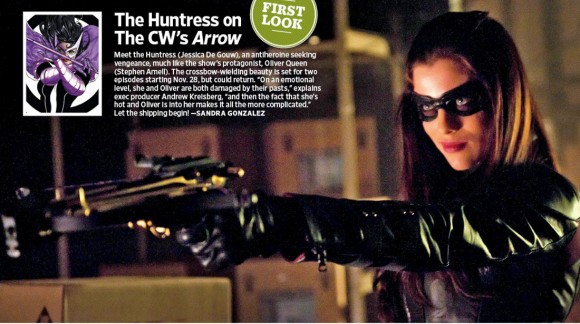 She’s already smarter than Oliver Queen – she’s wearing a mask. Seriously though, sometimes he doesn’t even have his eye makeup on. Read on to find out which other Mary Sue-favorite DC woman is set to join the cast soon!

Are you ready for this? Kate Spencer. Yes, superhero, lawyer, single-mom, Kate Spencer. Known as Manhunter in the comics, Kate is probably one of the coolest female superheroes around. At least, Susana and I think so. She’s the daughter of two people with superpowers but doesn’t have them herself. Instead, she pieced together her costume and tech from other characters, prosecutes supercriminals in the day, and fights crime at night. I highly recommend picking up the solo title she held for a while.

Kate will be played by Chelah Horsdal and it’s extremely cool they’ve added the character to Arrow. Presumably she’ll be prosecuting Oliver. Bummed we can’t see the whole costume on Jessica de Gouw’s Huntress, but happy they’ve kept her crossbow. You’ll be able to catch her episode November 28th.