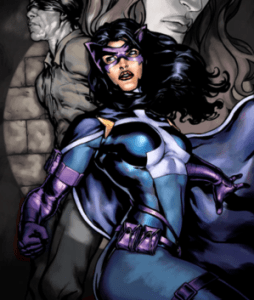 “I play Helena, but I’m also The Huntress, so I have to be able to hold my own. The duality of the role, it’s challenging. I have to be able to kick butt and all of that, and I’m quite feminine in my normal every day [life]… the fighting and all of that is new and interesting for me, but it’s a good thing. I’m really enjoying it. I’ve kind of been thrust into it, so I might as well just jump in, right?” she says. Jessica teases that the Huntress is introduced into Arrow “with a punch.” “She comes in strong.” — Ksitetv, talking to Jessica de Gouw, the latest woman to play the Huntress in a screen adaptation.

De Gouw has quite a lot to say about her character in the interview, about how Helena and Oliver are in some ways opposites, and how she’s been reading Huntress comics for inspiration. She refuses to let any details leak about her costume, though… other than that as Helena, the costume designers are making sure she’s always in a bit of purple. You can read the whole interview here.