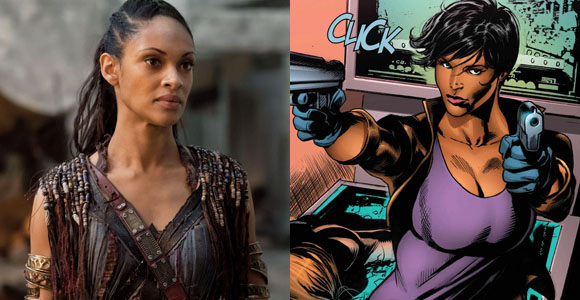 We were happy to hear The CW’S Arrow would be bringing in DC Comics character Amanda Waller for their second season but now we know who will play her – Cynthia Addai-Robinson. Hit the jump for details plus the latest on their search for The Flash!

Addai-Robinson was already on The CW’s radar thanks to her guest role on The Vampire Diaries but she’s also recently appeared as Naevia on Spartacus: War of the Damned. Here’s what TV Guide had to say about what the actress will get up to in Season 2:

In the Arrow-verse, the formidable and enigmatic Amanda Waller works for A.R.G.U.S. — Advanced Research Group United Support — a clandestine agency that has a mysterious agenda and possesses key information about the Arrow. In the comics, Waller runs the Suicide Squad, which will be introduced in Season 2 as Deadshot (Michael Rowe) teams up with Bronze Tiger, who will be played by Michael Jai White.

While we’re excited for another DC lady to make it onto Arrow, it’s easy to see they’re keeping her look in pace with the New 52 version of the character. Previously, Pam Grier had taken on the role for The CW in Smallville, while Angela Bassett took over in the Green Lantern live-action film, and CCH Pounder voiced the character in the old Justice League animated series.

Meanwhile, Entertainment Weekly spoke with executive producer Andrew Kreisberg on the status of their Barry Allen Flash search for introduction into the series. “It’s been a really exciting process just getting to meet so many fantastic actors and seeing the enthusiasm that so many people around town have for the character,” he said. “It’s just amazing — I have pictures of myself at age 4 holding a Flash and a Superman doll. That I’m sitting here writing the Flash and Green Arrow now, it’s more than my little nerd heart can bear sometimes.”

Kreisberg added they need to find the actor by September 30, when they start shooting the Flash episode.