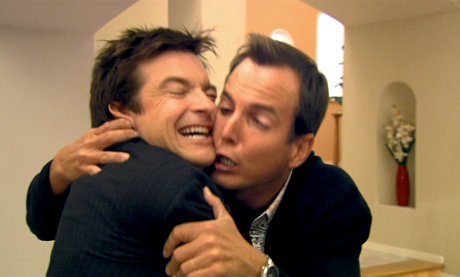 We know, we know. We keep covering the Arrested Development movie as if we don’t know it’s definitely going to happen, even though we know that it is, along with a new series that will be streamed exclusively on Netflix. (It is Definitely Happening in 2013.) However, we like to make sure that all of our ducks are in a row. In this case, the cast and original writing staff. Good news: all those ducks have signed on to write the new series and screenplay. They even have an office and parking spaces!

AD writer Dean Lorey has his own blog, and he recently wrote the following about the currently-in-pre-production series and movie:

We’re really doing this thing. Mitch Hurwitz, Jim Vallely and I are off writing the new season of ARRESTED to premiere on Netflix in 2013. The original cast is back. There are offices and parking spaces. We’re shooting this year. I wish I could give more specifics but, for the moment, even the schedule is being kept under wraps. But it’s happening and it’s great to be back with my pals from the show. More later as it becomes okay to release further details…

By the original cast, Lorey is referring to the following people: Jason Bateman, Will Arnett, Jeffrey Tambor, David Cross, Michael Cera, Portia De Rossi, Tony Hale, Alia Shawkat, and Jessica Walter. That’s everyone! And while Lorey doesn’t make any specific mention, there have been several confirmations that everyone is, indeed, back on board. (Basically every time we cover this story, there is an added statement about the entire cast coming back. In fact, I doubt this would have come this far if there was a holdout (::coughcough::Michael Cera::coughcough::).

But the really great news is that the same people who are truly responsible for turning this show into a cult hit — the writers — are also coming back. And that will make for a truly happy (and welcome) reunion.