Why Is It That Legislators Think Basic Rights Don’t Apply On The Internet? 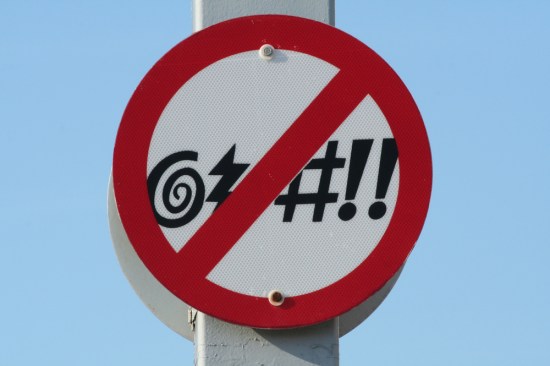 When it comes to Internet activism and Internet discussion of law in general, you’re bound to find a lot of people arguing for “freedom.” Freedom to do what they want, freedom to say what they want, and freedom to be anonymous about it. Now, you might say (and many do): “That’s because they’re all a bunch of thieves and bullies who want to keep stealing and bullying.” And to an extent, you might be right. The other reason though — the main reason — is that basic rights are almost constantly under attack whenever the Internet is involved. Legislators in Arizona, for instance, want to (and think they can) outlaw obscene, lewd or profane language on the Internet, punishable by a $250,000 fine and up to six months in jail. May I suggest you all engage in a bout of self-fornication?

The absolutely insane bill is Arizona House Bill 2549, which has somehow already passed through both legislative houses relatively unscathed and is just waiting for a signature from Arizona governor Jan Brewer. The classification of obscene language on the Internet as a Class 1 misdemeanor sounds a bit crazy though, right? Clearly I must be sensationalizing. I’m not. According to the bill, if passed:

“It is unlawful for any person, with intent to terrify, intimidate, threaten, harass, annoy or offend, to use any electronic or digital device and use any obscene, lewd or profane language or suggest any lewd or lascivious act, or threaten to inflict physical harm to the person or property of any person.”

What you see here is a dangerously vague censorship law in utero, one that seems to argue that your 1st Amendment is non-applicable on the Internet. To an extent — a very, very limited extent — you can almost see where they’re coming from. The words “terrify,” “intimidate,” “threaten,” and even “harrass” all seem moderately sane from an anti-bullying, anti-stalking perspective, but it’s at “annoy” and “offend” that they go completely off the rails.

Likewise, threatening physical harm to a person seems pretty serious, but suggesting a lascivious act is another thing entirely. And that’s to say nothing of what might constitute “intent.” Anyone who doesn’t think this is a blatant encroachment on free speech can go have intercourse with themselves and, on completion, promptly expire.

Aside from that particular infuriating vagueness, there’s more infuriating vagueness when it comes to where this law would actually be in effect. It’s a state law, so it shouldn’t apply to the rest of us, but the Internet is a notoriously hazy place, mostly in the sense that it’s not actually a place. The bill has a solution for that too:

Either. It says “either.” You’d best be careful writing anything that might be read in Arizona. There are plenty of other very good arguments to be had about the bill’s insanity too. “Electronic or digital devices” are not necessarily designed for one-to-one communication, for example, and the bill makes no attempt to exempt blogs or public forums from it’s crazy power-grab.

This bill is bad. It over-reaches, it’s dangerous, and it’s idiotic. All that said, it really betrays a much much larger problem: Why would anyone, especially legislators, think this is an OK thing to even suggest just because it’s on the Internet? Consider this law as applied to speech, or the written word, or audio recordings. The prospect is nigh unthinkable. Somehow the Internet gets an exemption for being the Internet.

Maybe this all sprouts from a fundamental lack of understanding amongst many legislators as to what the Internet really is or how it actually works. It’s not that far out of a hypothesis if you remember the sort of things being said at the SOPA hearings. If this is the case, it’s still no excuse but there’s little evidence to suggest that anyone who’s “not a nerd” but proclaims to know how to handle these sorts of things will ever change their tune.

Hopefully, we can get these kind of issues resolved and set the record straight without having to wait until the vast majority of legislative bodies are comprised of people who grew up around the Internet. If not, I guess we can look forward to a few more decades of screaming at a wall, and with any luck it will remain legal to use profanity while doing so.

You can read the bill here.