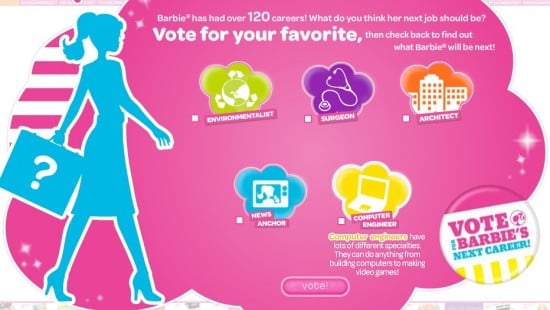 There are 10 kinds of dolls in the world: those who understand binary, and those who don’t.  Of the former, Barbie is now happily among them.  Mattel has announced that they will release Computer Engineer Barbie in “winter 2010.”  How did this come to be?  How else?

Mattel decided to let the world decide on Barbie’s 125th and 126th career themed dolls; allowing visitors to their site to choose between Environmentalist, Surgeon, News Anchor, Architect, and Computer Engineer.  Then, of course, the Internet found out about it.  At this point we would hazard to say that it was a foregone conclusion.

“All the girls who imagine their futures through Barbie will learn that engineers – like girls – are free to explore inﬁnite possibilities, limited only by their imagination,” says Nora Lin, President, Society of Women Engineers. “As a computer engineer, Barbie will show girls that women can turn their ideas into realities that have a direct and positive impact on people’s everyday lives in this exciting and rewarding career.” 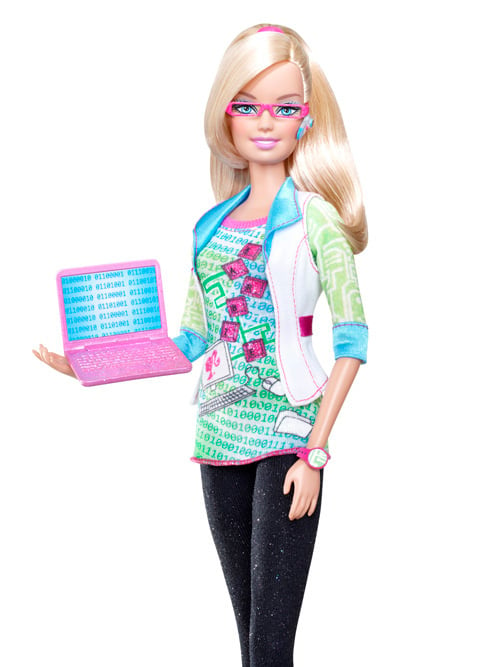 To create an authentic look, Barbie® designers worked closely with the Society of Women Engineers and the National Academy of Engineering to develop the wardrobe and accessories for Computer Engineer Barbie®. Wearing a binary code patterned tee and equipped with all the latest gadgets including a smart phone, Bluetooth headset, and laptop travel bag, Computer Engineer Barbie® is geek chic.

Speaking not so much as a girl geek, but as a girl, I never really got that into Barbie, although I was never really into dolls, either.  Dolls were always smiling, which kind of creeped me out.  However, computer science is a field notorious for a male dominated population, and I support this attempt to make it more accessible to young girls.  If I were a little girl who was into computers, I’d probably feel at least a little better about getting a Barbie doll from that great aunt I only see once a year if it was Computer Engineer Barbie.

The folks over at Urlesque have an excellent point to make about Barbie’s first day of her new job.  Hard to type when your fingers are all molded together.

Barbie’s First Day as a Computer Engineer from Urlesque on Vimeo.