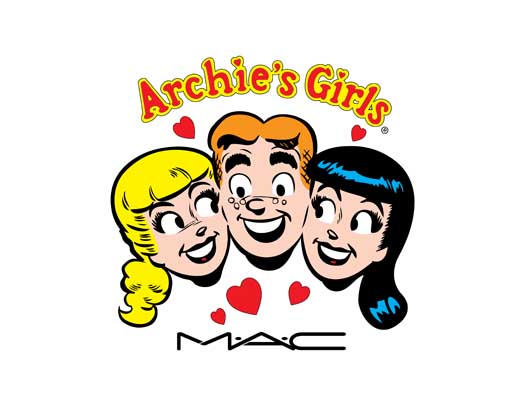 Archie is a very busy man these days. In fact, he’s taking on a whole new brand for himself in the form of cosmetics! Archie Comics announced they’ll be pairing with MAC Cosmetics for a new line called “MAC Archie’s Girls.”

I wasn’t joking when I said Archie was busy but the truth is, it’s really Archie Comics that are full-steam ahead. Just the other day we told you they’re going to have a special four-issue story arc crossover with the Fox hit Glee. It’s going to be written by Glee writer and playwright Roberto Aguirre-Sacasa (of Spider-Man: Turn Off the Dark fame). Also, not too long before that, we found out Star Trek’s Sulu, George Takei himself, would be making appearances on the comic pages. And in their very own special crossover event, Mega Man and Sonic the Hedgehog will meet for the first time!

So what about this Archie makeup? Are those freckles fake? Does he paint them on?

As far as we know, no. The line is actually said to “celebrate the iconic beauty looks of Betty and Veronica” and will hit stores in Spring of 2013.

Of course this isn’t the first time MAC has paired with a comic publisher. You may remember when they joined DC Comics for a line of Wonder Woman cosmetics and merchandise. If you put aside Supergirl and Batgirl, I think Archie might be the next logic pairing of makeup and comics considering how widely known they are. Many women I know grew up reading Archie Comics.

MAC Archie’s Girls will have their big debut at Comic-Con International in San Diego today and tomorrow with special events in the Gaslamp Quarter. Archie artist Dan Parent will be on hand at the MAC store there to demonstrate his art technique and do custom sketches for fans. If you’re in the area, you can also schedule an appointment with one of MAC’s makeup artists to get a Comic Con-inspired look.

No product images have been released yet but I’m looking forward to what they roll out.