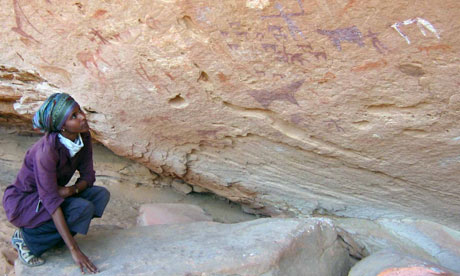 After her father was executed by Somalia’s Barre regime, a 12-year-old Sada Mire and her mother fled Somalia to reunite with family in Sweden. Eventually she pursued graduate studies in England, obtaining her Ph.D. in archaeology from University College London, and now she holds the title of being the only active Somalian archaeologist in the world. Having returned to her birth country, she is working hard to shed a light on Somalia’s rich cultural heritage. File this under “Women Doing Awesome Things.”

Mire originally became interested in archaeology as a refugee in Sweden, as a way to understand her new surroundings. When she felt satisfied with what she’d learned about European culture, she began to explore the past of the country she’d left behind. Returning to Somalia, she was responsible for the discovery of the rock art of Dhambalin, a site in Somaliland that features rock drawings dated to be over 5,000 years old. She is also very active in building Somalia’s Department of Tourism and Archaeology from the ground up, doing everything she can to preserve what she says is a heritage at risk of disappearing.

In a Q&A with Discover Magazine, Mire described what it was like to be one of the first people to view these paintings in thousands of years:

It was an incredible feeling just to stand in front of the paintings. Then I lay down to take photos and heard a snake breathing in my ear. My assistant told me he was thinking how he would cut off my arm, leg, or wherever to stop the poison if it attacked. I believe he would have done it. I didn’t tell my mother.

Snaps for Sada Mire, going where no one has gone before, and braving the snakes in  the process.

(Photo via Innovation is Dead)