Mobile App Store Revenues Projected to Explode Over Next Four Years, with Apple in the Lead 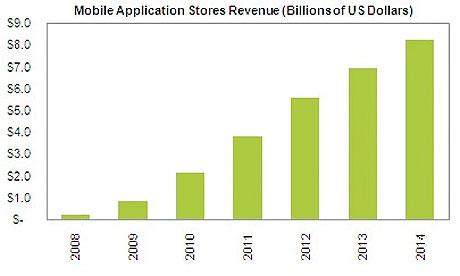 If you’ve been following tech trends to any extent, it’s probably no surprise to hear that mobile still has a lot of room to grow or that Apple, for all its foes, is poised to continue making boatloads of money for the foreseeable future. But the numbers at stake here remain striking to contemplate: According to research firm IHS, app sale revenues will grow 77.7 percent in 2011 alone, with Apple gobbling up a 76 percent share of that revenue. Of the 3.8 billion dollars in play this year, IHS predicts that Apple’s App Store will take 2.9 billion, with Android Market a distant second with 425.4 million, followed by BlackBerry App World at 279.1 million and Nokia’s Ovi Store at 201.5 million.

Though Apple may have a commanding lead right now, IHS cautions us not to count Android out: That projected 425.4 million dollars is a 295 percent increase over the Android app market last year, and a continued growth rate that speedy could allow Android to claim a large portion of the staggering 8.3 billion dollars in play by 2014.