We haven’t written a whole bunch about Arrow and Agents of SHIELD as of late—it comes of the two of them being on hiatus—but with both shows returning within the week, we thought it was time to share some news items that’ve been piling up. Within you will find: New actors for Agents of SHIELD and Arrow‘s Flash spinoff, some cast quotes about Birds of Prey and the Suicide Squad,… oh, and a whole bunch of pics of Sif’s Agents of SHIELD cameo. We thought you might be interested.

To start: Earlier we heard that Agents of SHIELD would be getting two new recurring characters. One of them ended up being Bill Paxton‘s Agent John Garrett, and now we know the other, “an African-American agent who specializes in combat/weapons.” He’s Agent Triplett, an associate of Garrett’s, and he’s being played by B.J. Britt (One Tree Hill, Vampires Suck, and, interestingly, the CW’s Wonder Woman show that never happened. He’d have been someone named “Willis Parks”).

Here’s the first image of Triplett, who will be introduced with Garrett in the next week’s episode, “Tahiti”: 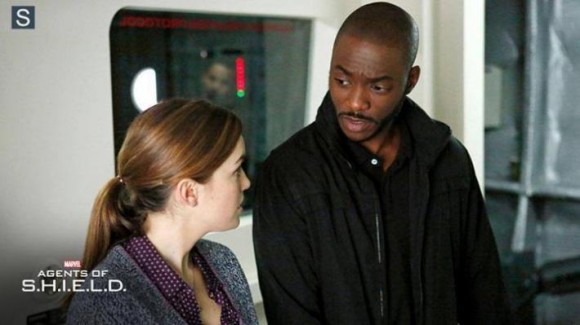 The next week’s episode is “Yes Men,” aka The One Where Sif Will Be On My TV and Fight A Supervillain Sorceress Oh My God Oh My God. We already showed you one promo image, and now we have some more.

That car never stood a chance.

The Flash also has a new actor: Michelle Harrison will play Nora Allen, mother of Barry Allen. Her death when Barry was a kid is an integral part of Flash’s backstory, which makes it interesting that Deadline lists Harrison as a “guest starring/recurring role.” We’re probably just looking at repeated flashbacks, but could they be futzing around with Flash mythology instead? FYI, The Flash has already cast their Eobard Thawne, aka the “Reverse Flash,” who was responsible for Mama Flash’s death. Except they’re calling him “Eddie Thawne,” because they hate good names like Eobard.

And finally, TVLine got some of the actors of Arrow to answer fan questions. The two that caught our interest are about the Suicide Squad (first picture here) and the March 26th Birds of Prey episode.

Of the former, there’s going to be a flashback to a “Diggle/Lila[sic]/Afghanistan” adventure in the March 19th episode, but Diggle actor David Ramsey also says “There’s a bigger story with the Suicide Squad and … their involvement perhaps with Team Arrow in the future. There’s a lot of set-up for the season finale…. Big stuff.”

And Black Canary actress Caity Lotz spoke about a “dope showdown” involving Jessica de Gouw‘s Huntress. “There’s also some cool stuff with Laurel, because The Huntress takes hostages and Laurel is one of them. So there’s that whole dynamic where Laurel doesn’t know Sara’s secret, what her sister’s actually been up to!”

So that’s all the news that’s fit to print on Arrow, The Flash, and Agents of SHIELD. Hiatuses, be over!