He's too busy cleaning up at Hogwarts. 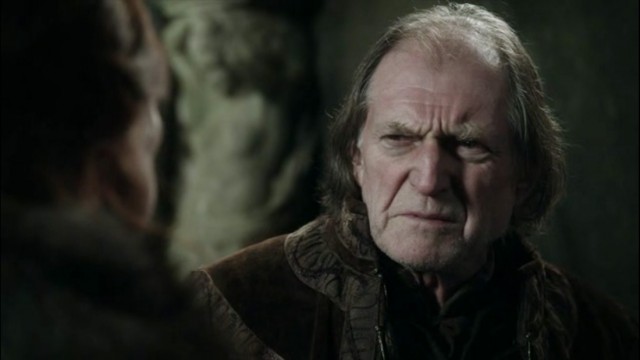 [Several bits of casting news for Season 5 as well as vague mentions of upcoming book/show plots to follow.]

Actor Kristian Nairn had recently confirmed he would not be playing Hodor for Season 5 of the hit HBO show, though we’re interested to see how that plays out considering Isaac Hempstead Wright will be continuing Bran’s storyline. My current thinking on that is a scenario in which they filmed something at the end of Season 4 which leaves Hodor recuperating while Brad goes on his wild greenseer adventures.

Anywho, Sean Bean has discussed the possibility of Ned Stark returning in the future but we were somewhat surprised to hear we’d be getting some more Charles Dance in Season 5 considering recent events. We also know, theoretically, Michelle Fairley won’t be back to continue that thread in the books, ALTHOUGH SHE ABSOLUTELY SHOULD.

But, as to this latest news about Walder Frey…

“I spoke to [showrunner] David Benioff, and he said, ‘You’ll be back, you’ll be back.’ But not in this season, not the one they’re doing now. Not for season five,” Bradley told Vulture in a recent interview. “But he’s got more to do in the books, and I hope he’ll be back at least for some kind of divine retribution, which has to be coming his way at some point. Surely he can’t get away with all that? I’d like to think he survives just a bit longer for that. I wouldn’t be surprised if he’s back for season six, but I haven’t heard anything definite.”

Bradley also told the amusing story of a photo of him which went viral.

Someone else at a convention came up to me with a copy of a book called Wedding Planning for Dummies. He said, “Will you stand next to me and pretend that you’re avidly reading this book?” And so I’ve got this picture that people tell me has just gone viral. Of course, while we were doing it, it was just a fan! He just wanted a picture that was slightly different.

Please preface your comments with “[SPOILER]” if you’re doing to dissect what all of this might mean, your fellow fans would appreciate it!