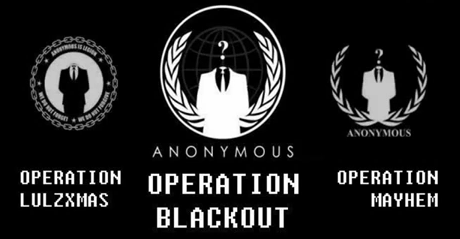 An Anonymous-branded message threatening Sony and a handful of celebrities has surfaced and calls for attacks on the target parties as retaliation for their collective support of SOPA. The message announces that Anonymous will “destroy [Sony’s] network,” and has “declared that [their] fury will be brought upon…Justin Bieber, Lady Gaga, Kim Kardashian, and Taylor Swift,” for their grievous crime. Now, I’ve said it before and I’ll say it again: Releasing a video announcing an Anonymous attack doesn’t necessarily make said Anonymous attack real, but this one seems to be gaining some traction.

As with any “Anonymous Announcement,” it’s imperative to consider the source. The YouTube account that released the video, TheAnonMessage, probably isn’t what you would call a premier source of Anonymous news, but the video does have about 60,000 views at the time of this writing. TheAnonMessage has also uploaded plenty of other videos announcing other Anonymous operations, but I can’t say that I’ve heard of many of them, and I’m willing to bet that at least 95% of them never actually took off. They date back to July of this year, and the first 2 laughably include the prefix “Official” in the title. It’s also worth noting that the YouTube channel’s associated Twitter account boasts a paltry 225 followers, so take the decree as you will.

All that being said, do a quick Google search for “Anonymous Sony SOPA” and see how many hits you get. Quite a few. Just like the big “Anonymous is attacking Facebook” thing a few months ago, the media has gotten the ball rolling on this one, despite the fact that it’s nigh impossible for anything to actually be officially related to Anonymous until after the fact, and it’s a grey area even then. In any event, if something does happen, it’s going to be bad news for Sony, who’ve already had to deal with this sort of mess plenty of times before. Then again, maybe they’re ready for it this time. As for the random assortment of celebrities, well, when isn’t there someone trying to take them down or steal their personal data, right?

Here’s the script from the video:

It has come to the attention of the Anonymous activist community that you have chosen to stand by the Stop Online Piracy Act. This act will halt online businesses and restrict access to many sites for many users. Supporting SOPA is like trying to throw an entire company from off a bridge. Your support to the act is a signed death warrant to SONY Company and Associates. Therefore, yet again, we have decided to destroy your network. We will dismantle your phantom from the internet. Prepare to be extinguished. Justice will be swift, and it will be for the people, whether some like it or not. Sony, you have been warned.

To those doubting our powers. We’ve infiltrated the servers of Bank of America, The United States Department of Defense, The United Nations, and Lockheed Martin. In one day.

For their approval to SOPA, we have also declared that our fury be brought upon the following persons. Justin Bieber. Lady Gaga. Kim Kardashian. and Taylor Swift.

Supporters of SOPA, you should’ve expected us.

And a link to the actual video if you really, really need to hear the text above read by a computer.