Your fork and spoon twirl technique is no match for physics. 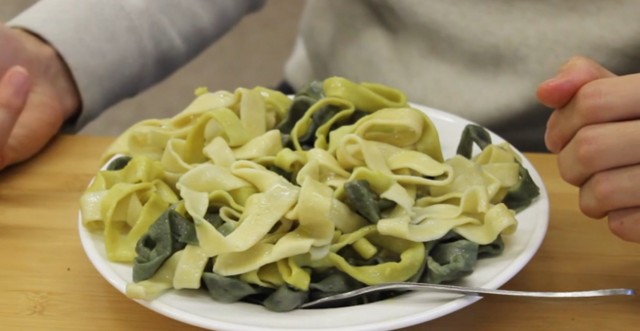 Physicists sure know how to make a point. To illustrate how ring-shaped polymers can intertwine in complicated ways, they’ve created anelloni, AKA the most annoying shape of pasta ever invented or the most weirdly diabolical evil scientist plot ever.

The maddening new pasta is the creation of physicists Davide Michieletto and Matthew Turner of the UK’s University of Warwick. They wanted to create a real-world way to get the point of their ring-shaped material computer simulations across. And so, anelloni—based on the Italian word anello, which surprisingly means “ring” and not “demon noodle”—was born.

Their simulations show what would happen if ring-shaped molecules got sufficiently long and tangled enough to appear frozen in place, which would be the definition of a new state of matter known as “topological glass.”

Or, for those of us trying to eat the infuriating pasta, it would be a new definition of pain and suffering as we try to eat it slowly over a thousand years. I think I’ll stick to rotini and ravioli, thanks.