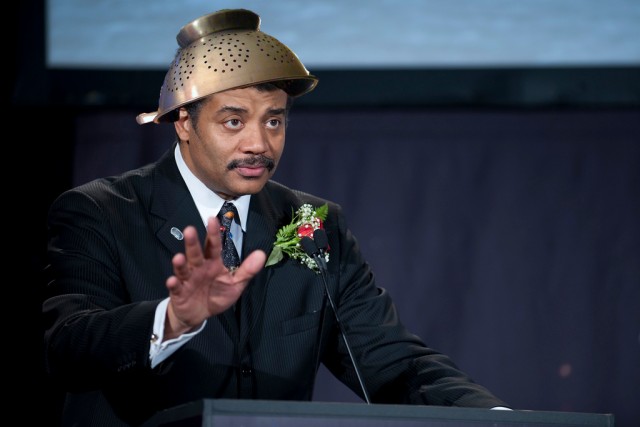 Noted astrophysicist, Director of the Hayden Planetarium, and host of Cosmos Neil deGrasse Tyson will be speaking during the Omaha Pastafarian conference “Apostacon” this September. Allow us to explain what that is and why we’ve photoshopped a colander on Tyson’s head.

Pastafarians are members of The Church of the Flying Spaghetti Monster, a parody of a religion that began after Bobby Henderson wrote an open letter to the Kansas City School Board claiming his belief that the Flying Spaghetti Monster alters carbon dating results, and asking that his beliefs be given equal time in the science classroom. It’s since built a following of atheists and other people who want to see reason and science put ahead of religion.

Members of church sometimes wear colanders as hats to show their devotion to the Flying Spaghetti Monster—hence the crack photo manipulation seen above.

They hold an annual conference in Omaha called Apostacon which is associated with the Omaha Coalition of Reason. That’s the group that’s bringing Tyson to speak at their “Evening of Scientific Inquiry” held during, but not officially a part of, Apostacon. Tyson isn’t being brought in by the Church of the Flying Spaghetti Monster, but the “Evening of Scientific Inquiry” falling during Apostacon probably isn’t a coincidence either.

(via Omaha.com, images via NASA and elisson1, beautiful photoshop job my own )