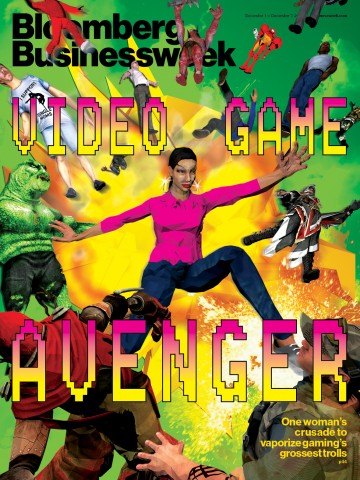 Ok, but what class of Social Justice Warrior is Video Game Avenger? Is that higher or lower than Feminist Mage? Plz advise.

If you guys were looking for a reason to buy an actual print version of Bloomberg Businessweek tomorrow and feel all hoity-toity and important, look no further! Anita Sarkeesian and her “Crusade To Vaporize Gaming’s Grossest Trolls” has been immortalized in animated form on the cover!

If you’re not fussed about having an actual, tangible copy of the magazine, you can check out her profile right now online. (Definite trigger warning for violent threats and graphic video game imagery, however.)

Businessweek’s piece is an in-depth look at what led Sarkeesian to start Feminist Frequency and how the daily life of feminist critics has been impacted by Gamergater harassment; it also shares insight from other high-profile women in STEM and Sarkeesian’s male co-producer.