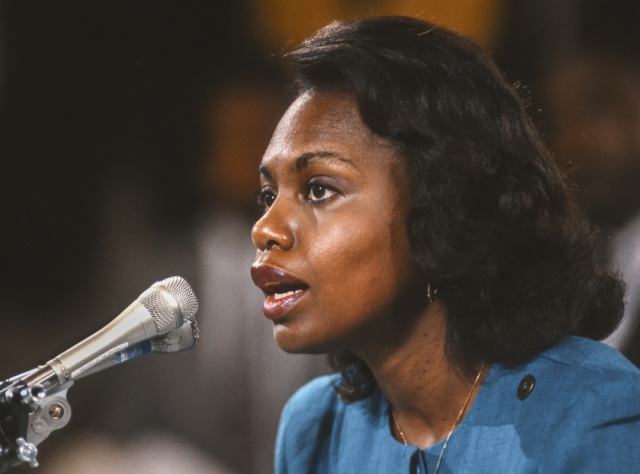 I would love to say that I organically came to the realization of how Anita Hill was being left out of the current narrative about sexual harassment, but I am not that woke. The realization came while I was listening to a podcast called “KCRW’s Left, Right & Center” where one of the hosts, Lawrence O’Donnell mentioned that he was bothered that the Anita Hill Testimony during the confirmation of Clarence Thomas did not teach men what they should have known about behavior in the workplace. It was like a flip was switched in my brain: why haven’t we been talking about more Anita Hill?

Realizing that the Anita Hill testimony happened the year before I was born and that some people may have missed the resurgence of interest in the subject last year with the HBO film Confirmation, here is what you need to know for those who are not aware of Hill and how she brought sexual harassment to the national stage.

In 1991, Clarence Thomas was nominated by George H.W. Bush to fill the seat on the Supreme Court that was previously occupied by Thurgood Marshall, the first black Supreme Court Justice. The election of Thomas a deeply controversial decision because he was largely appointed because he was black (despite what they said at the time) and Bush Sr. wanted to fill in the spot that would skew the court into a more conservative way. An action that led to outrage from both feminist and black activist groups who were aware they were being pandered to.

During his confirmation hearing, Anita Hill was asked about her previous work experience with Thomas and if that included sexual harassment from Thomas. She said that it did occur and ended up writing an affidavit on the issue. When Anita Hill was called to testify before a Judiciary Committee that was called to deal with the accusations before a final confirmation vote, it was a shit show from the very beginning.

Firstly, the committee was all-male and all-white including future vice-president Joe Biden. Biden allowed Thomas to speak first in an unorthodox decision, which screwed everything up because without Hill’s testimony there was nothing to question Thomas about.  When Anita did finally get to testify she was very clear about the explicit and vile things Thomas would say both to her and around the office. There is a written transcript of the testimony as well as video of the hearing and the statement, but here are some key excerpts:

“After approximately three months of working there, he asked me to go out socially with him. What happened next, and telling the world about it, are the two most difficult things-experiences of my life.

I declined the invitation to go out socially with him and explained to him that I thought it would jeopardize at -what at the time I considered to be a very good working relationship. I had a normal social life with other men outside the office. I believed then, as now, that having a social relationship with a person who was supervising my work would be ill-advised. I was very uncomfortable with the idea and told him so.

I thought that by saying no and explaining my reasons, my employer would abandon his social suggestions. However, to my regret, in the following few weeks, he continued to ask me out on several occasions.

He pressed me to justify my reasons for saying no to him. These incidents took place in his office or mine.

After a brief discussions of work, he would turn the conversation to a discussion of sexual matters. His conversations were very vivid. He spoke about acts that he had seen in pornographic films involving such matters as women having sex with animals and films showing group sex or rape scenes.

He talked about pornographic materials depicting individuals with large penises or large breasts involving various sex acts. On several occasions, Thomas told me graphically of his own sexual prowess.

Because I was extremely uncomfortable talking about sex with him at all, and particularly in such a graphic way, I told him that I did not want to talk about this subject. I would also try to change the subject to education matters or to non-sexual personal matters, such as his background or his beliefs.

My efforts to change the subject were rarely successful.”

Anita remained composed, but it was clear that she felt deeply comfortable with having to speak about all these explicit things and repeat them. Hill was a strong witness and held herself in a very calm, logical, and respectable manner. Yet, people were split on the issue and a lot of it had to do with the media circus that surrounded the trial. Hill was forced to relive her trauma on a national stage to a bunch of men, half of them were working actively against her and the other half doing little to help her.  They keep trying to trip her up and make it seem as if it was Anita’s fault for not speaking up sooner and stopping Thomas from having a higher position.

Hill’s testimony was the first time sexual harassment was brought to the national stage in such a way and in some ways it is unsurprising that a group of older white men would lack both the empathy, knowledge, and bravery to say and do the right thing, but it is still upsetting.

Arlen Specter, R-Pennslyvania, especially took a lot of cheap shots at Anita saying that since Thomas did not ask her own directly, or say he wanted to sleep with her directly that her conclusions were essentially invalid, despite the sexual nature of the conversations she was describing. Watch the interrogation is especially disgusting now because we have a much better understanding of what sexual harassment in the workplace is, but at the same time it is hard to see a black woman being raked over the coals by people who do not understand what she is talking about and are actively working to ensure Thomas is confirmed because it suits their party.

When Thomas was allowed to defend himself after the testimony and played the race card (and yes I, as a black woman, am gonna say it don’t @ me) so masterfully, I would be impressed if he weren’t also a sexist, incompetent, underqualified pig. He called the entire media experience around him a “Hi-tech Lynching for uppity blacks.”  Probably the most he has ever spoken about race or in defense of his race in his entire career of literally filling up space in the chair of a superior black man.

“As I said, I may have used poor judgment. Perhaps I should have taken angry or even militant steps, both when I was in the agency or after I left it. But I must confess to the world that the course that I took seemed the better, as well as the easier, approach.
I declined any comment to newspapers, but later, when Senate staff asked me about these matters, I felt I had a duty to report. I have no personal vendetta against Clarence Thomas . I seek only to provide the committee with information which it may regard as relevant .
It would have been more comfortable to remain silent. It took no initiative to inform anyone-I took no initiative to inform anyone. But when I asked by a representative of this committee to report my experience, I felt that I had to tell the truth. I could not keep silent.”

She could not remain silent, just as the women coming forward now can no longer be silent. It is shocking that considering how important this incident was to the early 90s that men across industries still continued to harass women in the workplace. Anita Hill should have been the watershed. But it probably only reinforced that same bad behavior. After all Thomas “won.” He was confirmed into one of the most important positions in our country.

So perhaps we shouldn’t be shocked that we have a sexist in the White House and in almost every industry, they have been told they can get away with it publically time and time again. Sadly, just like with Hill unless victims speak out nothing can be done…and even then there is no promise of justice. History will be kind to Anita Hill and she deserves it because without her first steps we would be even further behind than we are now when it comes to discussing sexual harassment, so the battle she fought should not be ignored or forgotten.