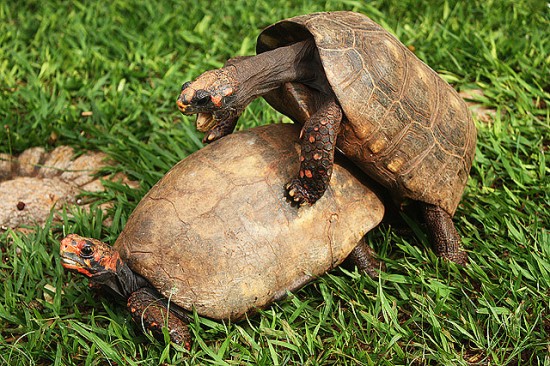 Animal sex gets a fair share of coverage in the media, for a couple of pretty simple reasons. Most people like animals, and most people are interested in sex. And sometime, animal sex is really impressive, as in the case of these awesome, hypnotic leopard slugs. However, a pair of researchers has authored a paper in Nature taking the media to task  for their coverage of animal sexuality and offering scientists tips on making their research papers less titillating. The main thrust of the article? That science journalists need to stop ascribing human sexual traits to to sex behaviors in animals.

In the paper, researchers Andrew B. Barron and Mark J.F. Brown chide journalists and editors for sensationalizing same sex coupling in animals. By describing these animals as “gay,” the authors say, writers are applying distinctly human sexual terms to animals which — as far as we understand — don’t have a concept for things like homosexuality.

This is not innocuous — these are terms that refer to human sexuality, which encompasses lifestyle choices, partner preferences and culture, among other factors.

Barron and Brown worry that this sort of coverage can lead to readers seeing homosexuality as an aberration or a genetic mistake that can be corrected — a take that’s both detrimental to the gay community and bad science. They also take pains to remind journalists that any study of sexuality in an animal is just that — a study of sexuality in that animal. That study might open new avenues for research in other forms of life — it also might not, so putting it into human terms, while tempting, is also misleading.

They also advise scientists to avoid terms like “gay” and “lesbian” when discussing the animals in their research, in an effort to prevent studies like “The ram as a model for behavioral neuroendocrinology” from ending up with headlines in the paper like “Brokeback Mutton.” Which is all well-taken, though we would point out that the word “neuroendocrinology” is unlikely to be found in headlines any time soon, as it doesn’t exactly “pop.”

And speaking as someone who reads scientific papers for a living, if I may be so bold as to offer a ProTip: please don’t make research papers any less titillating. They are already, by and large, plenty un-titillating. Most of them, while important, interesting, and occasionally mind-blowingly cool, are frankly so far from titillating as to exist in another universe entirely.