If there is a God, then surely He has abandoned us. 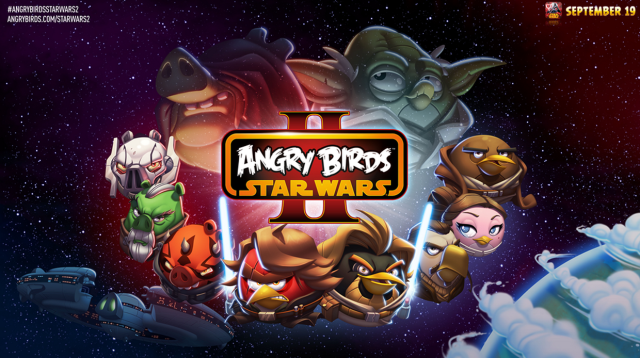 I am one of those people who falls squarely into the “irrational yet intense and passionate hatred for Angry Birds” camp. There’s just something about how it’s being marketed — I see more Angry Birds Star Wars merchandise in store now than I see actual Star Wars merchandise, and that upsets me on a visceral level I can’t quite understand or verbalize. So with the news that Angry Birds Star Wars II has both a trailer and a launch date looming for the new game, as well as a line of interactive Skylanders-knockoff toys, you can imagine the day I’m having. To borrow a phrase that I’m sure none of the four-year-olds Rovio and Hasbro are currently marketing these toys towards will get, I’ve got a bad feeling about this.

As the trailer below indicates, this game will focus heavily on the events of the three prequel films. Some of you who did enjoy the previous Star Wars game probably just converted to my way of thinking at the mere mention of prequels, but it gets even more gimmicky from there.

That’s right, your eyes did not deceive you. There’s a Jar Jar Binks Angry Bird for some horrible reason. On the plus side, this means you get to launch Jar Jar into a wall of bricks over and over again. Considering that’s what you’re supposed to do in order to win the game, though, it just won’t be as fun.

Hasbro will also launch a line of 30 interactive toys that come with “Telepods,” which allow you to unlock new characters and abilities by scanning them with your phone or tablet’s camera. You know, just in case you weren’t 100% sure that this is a money grab more than anything else.

In addition, you’ll also be able to join the “Pork Side” and play as a member of the Empire. Example: The General Grievous-themed pig pictured above. I might even hate this one more than the Jar Jar one because of how doofy it looks with those four lightsabers jutting out of it.

The game will launch on September 19th in app stores worldwide. The toys do not yet have a release date that we can find, but it might behoove you to steer your kid clear of that part of the toy shop in advance before they get any funny ideas.