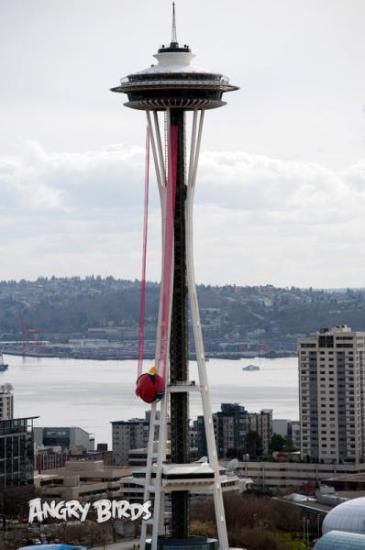 Rovio has always been keen on finding interesting ways to publicize their record-breaking Angry Birds franchise. Angry Birds Space is no exception. To this end, a giant angry bird — the red one — has been affixed to Seattle’s Space Needle in honor of yesterday’s official release. Needless to say, the scale is impressive. How impressive, exactly? Well, the slingshot is about 300 feet long, and the bird is 35 feet in its own right. But are there any orbiting pigs to target?

Turns out that’s a moot point because the bird isn’t actually going to launch. It would be pretty sweet if it did, but I guess it’s a little bit too much to ask. These birds do specialize in causing structural damage after all, but to be fair, the red one is probably the most harmless. The bird went up yesterday to coincide with the Angry Birds Space launch, and the plan is to have it remain there for a few days, doing nothing besides just sitting around. From the looks of it, it’d take off the top of the needle anyways, so maybe it’s all for the best.