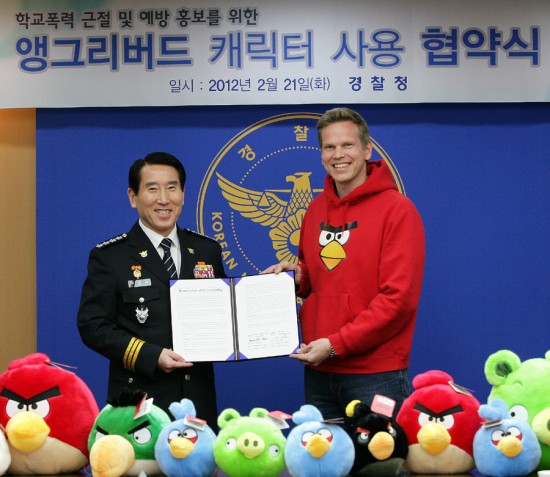 On February 21, Korean National Police Agency teamed up with Rovio Entertainment to create a campaign in which Rovio’s iconic Angry Birds can be used as a sort of anger management in a campaign that aims to prevent violence in schools. That’s right, Korea thinks that a video game — even one with the word “Angry” in the title — can actually help prevent violence. I wish I could say more of my own countrymen were equally enlightened.

The details of exactly how the program will work are a bit unclear at the moment, but the basic premise is pretty easy to understand: The Korean police will play off childrens’ familiarity with the Angry Birds characters to more effectively convey messages of violence prevention.  Senior vice president of Rovio Asia, Henri Holm, is understandably excited to see the company’s creations being used for a good cause.

I really hope that the campaign is successful in preventing school violence because that would be a good thing, but I can help but be afraid that the birds might actually overcome their own anger issues. Hopefully we won’t all end up playing Placid Birds a year or two down the line. That just doesn’t sound like much fun.