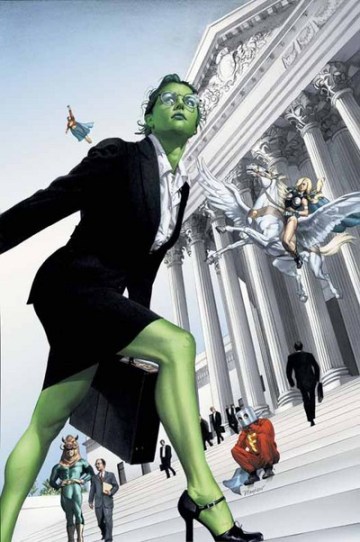 Angie Harmon currently stars as Detective Jane Rizzoli in the TNT crime-drama, Rizzoli & Isles, but you may remember her from the long stint she did on NBC’s Law & Order as Assistant District Attorney Abbie Carmichael. As it turns out, Harmon is itching to get back into law. Superhero law to be more specific. Harmon wants to play Jennifer Walters, a.k.a. She-Hulk. And yes, she already posted a picture of herself as She-Hulk to show us how serious she is. (UPDATED!)

Harmon posted a picture on her twitter feed showing what she’d look like smashing some concrete. Then, one of her followers did a bit of photoshop on the picture to make Harmon look more like the character she’s aiming for. Harmon posted the photo to Instagram but the story doesn’t end there. 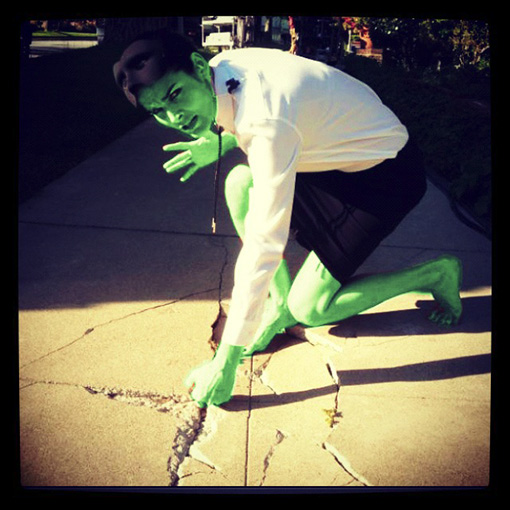 Harmon recently did an interview with Entertainment Weekly and couldn’t wait to show off the picture, as well as a few others from the comics, and the research she’s already done into the role. If you aren’t familiar with She-Hulk from Marvel Comics, she’s the cousin of the more famous Hulk, Bruce Banner, and she got her powers thanks to a blood transfusion from him. She doesn’t get as large as Hulk and can control her transformations. She uses her powers as a criminal attorney to defend superhumans in court and has been a member of The Avengers, S.H.I.E.L.D., and the Fantastic Four among other groups.

During the interview, Harmon mentioned how much she enjoyed The Avengers movie and then let the reporter know just  how much she wants to play She-Hulk and why. (There’s one-line of not-really-spoilery Avengers dialogue in this next bit.)

“I have to be her,” Harmon said. “You don’t understand. I have to be her. It’s the best quote ever when The Hulk turns around and goes ‘I’m always angry.’ I was like, Ohmygod! I stood up in the theater and literally cheered. I did.”

And she’d be fine wearing She-Hulk’s skimpy costume? ”I would rock that like there is no tomorrow. I would kill that outfit. I’d put these 36Cs on display. Boom!” she said. “And what about her libido? That’s my favorite part. She-Hulk, bed! She-Hulk, screw! Can you imagine? Then she just picks him up and throws him around the room like the Hulk did with the bad guy. [Makes smashing noises.] But apparently, she’s normal size.”

On the list of names that have swirled around my head in recent years for who could play She-Hulk, I’ll admit, Harmon wasn’t one of them. But I could see myself getting behind this, especially considering how enthusiastic she is about the role. Could Harmon join the ranks of the Avengers in its sequel or perhaps the next Hulk film? It would be an easy introduction for sure. We also know ABC is still planning a Hulk television show so there’s always a chance of her ending up there as well.

I recommend Dan Slott’s spectacular She-Hulk run if you want to continue your research, Harmon (I recommend it to anyone actually, it’s really great.).

UPDATE: When Slott saw the news he tweeted, “I swear I’d write the pilot for free.”