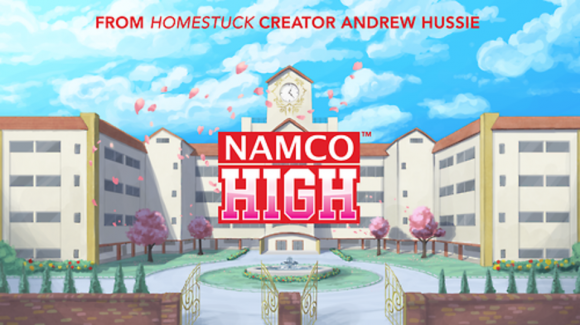 Andrew Hussie, creator of the 5,000 or so page webcomic Homestuck, has recently made a deal with Namco Bandai to take his already video game centric creativity to an actual video game, the dating sim Namco High. Namco High will presumably allow Hussie to take his ability to make fans ship any and every character pairing to a whole new level, as he creates a game that will center around dating various video game characters. For Homestuck fans, this may be a disappointment, as the unbelievable number of characters in the massive webcomic would certainly make for their own exciting, if not completely perplexing and alternate universe ridden, dating sim.  However, Namco High will not feature Hussie’s original characters, but characters from across Namco Bandai ‘s video games.

Andrew Hussie successfully overfunded his own Homestuck Adventure Game on kickstarter last September, and has been updating the webcomic he has known for less frequently leading up to the video game and the finale of the story. Given that the author and artist has been integrating video games and flash animations into his comic for years, and that the comic is largely influenced by video game tropes, the move makes sense for Hussie.  Plus, with a very loyal following, it is likely that Hussie will bring quite a few Homestuck fans along with him to Namco High. Of the partnership, Namco Bandai Editor in Chief and Producer Rob Pereyda said,

“There is no creator with more of a vibrant originality right now than Andrew Hussie…We are beyond excited to see where he takes these characters and the unique relationships that will literally unfold between them.”

The question for Homestuck fans, however, is whether or not Hussie is moving on from webcomics, especially with Homestuck set to end in the next year or so.

Previously in Homestuck and Videogames