Anchovy Poop Does Its Part to Keep Climate Change At Bay 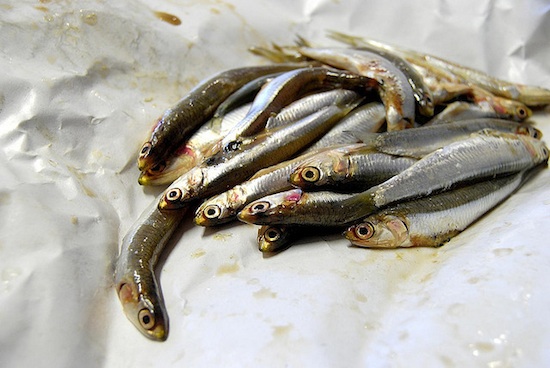 Scientists have a new and unexpected weapon in the fight against climate change: Anchovy feces, and lots of it. Researchers at the Virginia Institute of Marine Science and Rutgers University have released a study demonstrating how small, foraging fish like anchovies can act as a “biological pump,” transporting biological material from the ocean surface, where the carbon it contains can be released into the atmosphere, to the bottom of the ocean, where it’s carbon is effectively trapped.

It’s been widely understood that the fish’s prey — tiny little crustaceans called copepods — play a key role in this cycle. Copepods dine on algae that would otherwise release carbon directly into the atmosphere, but after digestion by the tiny crustaceans, that carbon sinks to the bottom of the sea as a fecal pellet, leaving unwanted carbon out of the atmosphere.

Researchers wanted to know what role fish played in this carbon capture cycle, though. They found that the fish diets, which consist of copepods as well as algae and single celled microorgnisms, produced poop pellets that travelled faster than those made by copepods. Fecal pellets from northern anchovies off the coast of California could travel at rates nearing a half mile per day, hitting the seafloor of the study site in less than 24 hours. Though it’s not a lot of carbon — just 20 or so micrograms per fish per day — given enough fish and enough time, these salty swimmers might just be worth more as carbon cleanup crews than they are as the world’s most maligned pizza topping.

The study also makes for a timely reminder that the ways in which humans change the climate of the planet aren’t limited to belching emissions out of power plants and cars. There’s a growing body of evidence that when we change ecosystems by things like water pollution of overfishing, we can change the way those ecosystems interact with the rest of the world, mucking about with their natural carbon capture process in the bargain.

(via Virginia Institute of Marine Science)