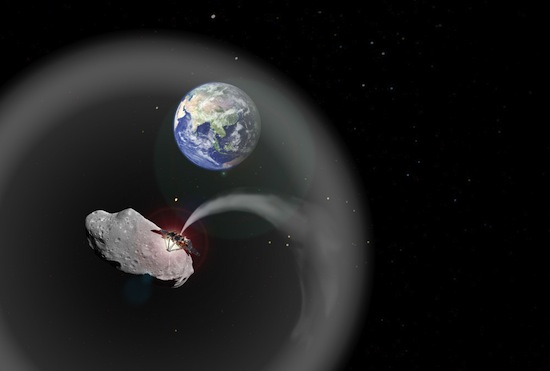 Environmentalists want people to reduce their carbon footprints, compost, and do absolutely anything that might be able to reduce the effects of global warming. I’m not saying the environment isn’t important, but the battle against convenience will inevitably be a losing one. Luckily for us, scientists from Scotland may have found a way to prevent the sun from melting us alive without asking the average person to stop driving their car. Researchers at the University of Strathclyde think the best way to reduce the sun’s impact on the planet is to block some of its rays with a giant cloud of asteroid dust.

Technically, the plan falls under the umbrella of Geoengineering, where scientists would attempt artificially altering the planet’s temperature using one of a handful of grand procedures for fixing the planet’s climate problems. Some of these projects involve strengthening the atmosphere, others suggest building a series of mirrors to deflect some of the sun’s heat back into space. Realistically, the asteroid dust technique would simply absorb some of the energy directed at the Earth, which would counter-balance the increased amount of heat passing through our atmosphere.

So how do we do it? Researchers suggest we equip nearby asteroid orbiting the earth with a “mass driver”, which would fling the rock’s debris away from it. The device would both increase the asteroid’s orbital speed, and serve as the primary device for generating the dust shield. They even have a specific asteroid in mind. 1036 Ganymed, the largest near-Earth asteroid, could create a dust field that would absorb 6.58 percent of earthbound solar radiation.

On the other hand, the field would weigh about 11-million-billion tons, which sounds like enough to kill all life on Earth. That’s just my guesstimate, though.

Of course, even if the asteroid cloud could work, the team working on the project doesn’t think people should give up on promoting a greener lifestyle:

“I would like to make it clear that I would never suggest geoengineering in place of reducing our carbon emissions,” said Russel Bewick, space scientist at the University of Strathclyde. “We can buy time to find a lasting solution to combat Earth’s climate change. The dust cloud is not a permanent cure, but it could offset the effects of climate change for a given time to allow slow-acting measures like carbon capture to take effect.”

In the end, the question is whether or not reducing solar radiation is worth the risk. There’s no way to test whether or not the asteroid dust shield would work. We’re either going to do it or we aren’t. Personally, I’m for it: I just looked out my window and saw guy throw a cheeseburger wrapper next to a garbage can, so I think we’re going to need a little more time to get our act together.