My Anaconda Don’t Want None Unless It’s Got RiffTrax Commentary, Son

"He can tell I ain't missin' no meals." - The anaconda 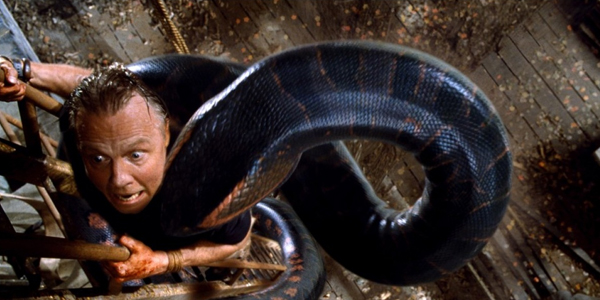 Back in May, RixxTrax ran a Kickstarter to fund their amazing send-up of the 1998 Godzilla—and they got so much cash that they were able to add a second screening. Now, we’re to be the beneficiaries of that Kickstartery goodness, because RiffTrax is bringing their particular MST3K flair to Anaconda, live in theaters October 30th.

From the event page, here’s what you can expect from your from the event (which it’s totally worth ditching that lame Hallowe’en party for):

The guys from Mystery Science Theater 3000 are bringing their trademark commentary to the 1997 adventure-horror movie ANACONDA!

Thanks to our generous Kickstarter backers, we’re bringing ANOTHER giant reptile to RiffTrax Live screens across the U.S. just in time for Halloween! Join us on October 30th, 2014 for a live riff of the infamous 1997 movie starring Jennifer Lopez, Ice Cube, Owen Wilson, Jon Voight’s accent, and a giant animatronic snake!

You can grab tickets here at Fathom Events, and you can definitely demand a refund if there is not at least one Nicki Minaj-themed joke over the course of the movie.*

*Do not actually do this.