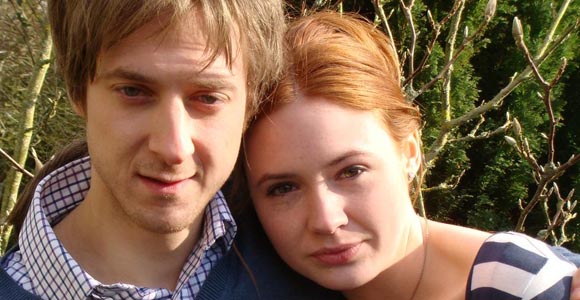 As if Steven Moffat wasn’t hurting us enough by letting the Ponds go, he’s just revealed the ending he originally had planned for Karen Gillan and Arthur Darvill’s Amy and Rory has been altered. Will we ever know what their fate would have been if he went with his first choice? Hit the jump to find out why he did what he did and what it meant to Matt Smith.

Late last year, Moffat broke the news to fans that the Ponds time was coming to a close. “Amy and Rory will be rejoining us next series and joining the Doctor back on the TARDIS, but the final days of the Ponds are coming – and during the [7th] series,” he said. “I’m not telling you when and certainly not telling you how. But that story is going to come to a heartbreaking end.”

Not many of us really want to know the “how” of it, we’d like to postpone that as long as possible, but as it turns out, Moffat’s plans changed significantly since he first informed us the Doctor would be getting a new companion.

“I completely changed the ending as I was writing it, thinking ‘No, I’ve got it wrong… I’m on the wrong emphasis’ – but it’s a good one and it’s properly emotional,” he told Digital Spy.

Meanwhile, the actors are keeping mum on the plot but are open about how much they loved the script.

“I instantly phoned Matt [when I read the episode] and I was crying and laughing hysterically,” said Gillan, “because it’s so good!”

Darvill remarked, “It was like getting the last chapter of the best book you’ve ever read and being really surprised by the ending… and really satisfied. It was pretty emotional.

Meanwhile, Smith had this to say. “I was very moved, very moved indeed, because not only is it two characters that I love, it’s two actors that I love working with. To see them go – and I think go so beautifully… it’s moving.”