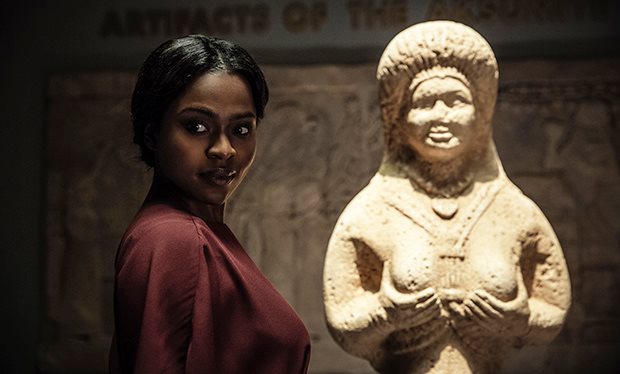 American Gods showrunners Bryan Fuller and Michael Green sat down with Nerdist to hint at their plans for the second season and discuss how the show will continue to explore the expanded stories of female characters like Bilquis, Laura Moon, and Easter.

“The second season has so much more energy and drive than the first season,” said Fuller, “because we spent eight episodes trying to establish a vocabulary, not only for the audience, but for Shadow Moon to understand the world that he’s been plunged into. We ended that season with an awareness that gives us the opportunity to go further and dig deeper for these character stories, now that everybody’s on the same page.”

The showrunners also spoke about the role of women on the show, and how they’ve beefed up and expanded many of the characters from the novel. We’ve posted plenty about these female characters before on The Mary Sue, from Joelle Monique’s piece on Bilquis’ intriguing, improved storyline to Lacy Baugher’s piece on Laura Moon’s refreshingly unapologetic awfulness. It’s been awesome to see how the women are giving more prominence and nuance, and it seems that Fuller and Green understand the importance of that change.

“It went to our first conversations with Neil,” said Fuller, “the idea that this series was going to take a book we love and accordion it out. We asked him, ‘What do you think about expanding those two roles, especially, being in the beginning?’ and his eyes lit up with interest, because those are characters he wanted to do more with himself, but he couldn’t as a first-time novelist that was already writing a book that was probably frustratingly too long for his editors.”

“It was wanting to have a more balanced voice on the show,” said Fuller. “The book has a limited amount of page count in order to tell its story…Neil didn’t have the real estate, and we did as a TV series. Michael and I both love writing for women, and exploring female characters. It just felt like it was absolutely necessary, and there wasn’t ever any choice in the matter.”

While there’s obviously some retroactive ass-covering for American Gods‘ male-heavy plot here, there’s also a very valid point about the difference between a novel and a TV series. An ongoing TV series has a lot more room to explore an entire cast of characters than a novel does – especially a novel like American Gods, that’s tied to closely to Shadow’s perspective. So I’m glad Fuller and Green plan to make the most of that opportunity, and I’m glad they were are aware that the portrayal of women – especially a black woman like Bilquis – as an integral part of the mythical story of America is indeed “absolutely necessary.”

The second season of American Gods doesn’t have a premiere date yet, but we’re hoping for some point in 2018.

(Via Nerdist; image via Starz)