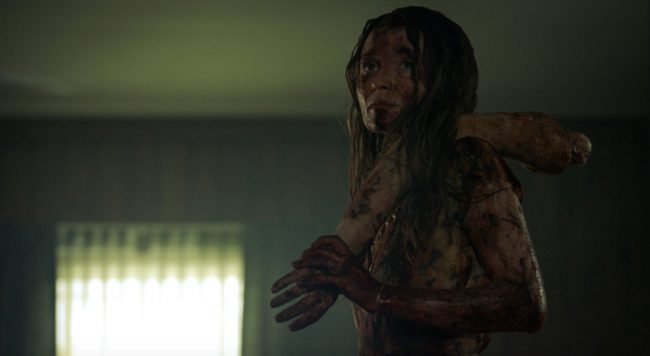 American Gods is a series that asks its audience to believe in many impossible things. There are old gods and new gods, all of whom have complicated histories with our country and one another. Some of them have adapted to America and the modern age, and some have not. And yet, the show’s most interesting story isn’t about one of the ancient figures whose reputations we know from myths or the flashy modern versions that appear dressed like David Bowie. Instead, it’s a simple, human woman who constantly makes terrible choices, believes in nothing and is generally awful to everyone she meets. Her name is Laura Moon (Emily Browning), and she’s the best character on American Gods right now.

Laura is the dead wife of the series’ lead character, Shadow (Ricky Whittle). Her death, just as Shadow is released from prison, kicks off the series’ main story and sends her grieving husband off on a roadtrip with a weird old man he meets en route to her funeral. In many stories, this would probably be all we see of her. Fridging a female character in order to drive story and/or development for a male one isn’t exactly a new thing, after all. But, happily, that isn’t what happens here. Instead, Laura returns from the dead, and she’s just as unpleasant and unsympathetic a person as she was when she died. But the thing that makes Laura’s story really something special? The series doesn’t apologize for her awfulness. In many ways, she is fascinating because she is allowed to be terrible.

As a character, Laura doesn’t particularly need or want saving. She’s selfish and self-loathing by turns, but she’s not looking for redemption. She isn’t really working on self-improvement. It’s not even clear that she can be saved, if such something like saving exists. And these are actually all fantastic things because American Gods realizes something that too many other television properties ignore: we don’t have to like Laura in order to appreciate her story. She’s American Gods’ most fascinating figure, precisely because the show is so willing to embrace the darker aspects of her personality. Laura Moon is legitimately terrible, but it’s those same flaws that make her character great.

Neil Gaiman’s novel tends to show us Laura through Shadow’s perspective, which is often colored with the sort of rosy hindsight that death tends to lend to the departed. But even then, she’s not exactly a fantastic person. She cheats on Shadow with his best friend, and we’re generally encouraged to dislike her for it. American Gods the television show goes a step further. It doesn’t shy away from depicting Laura’s selfish, mean, or otherwise terrible behavior, but it also allows us to get to know her on her own terms. In an episode flashback, we see her before Shadow came into her life, and we learn that it wasn’t marriage that made her unhappy. Laura was already there well before that. In the show’s world, she wandered zombie-like through her own life, for years before her death.

Prior to meeting Shadow, Laura worked as a blackjack dealer who was so miserable she regularly tried huffing insect repellant in her hot tub with the lid on. On a good day, she’s barely going through the motions of living.  She chooses to marry Shadow out of what feels like desperation, or possibly a belief that he might be the catalyst that somehow changed her life. Instead, married Laura is still unhappy, only now she’s also resentful and bored. And her feelings that are all the more stark when set against her husband’s almost bumbling obliviousness. Though Shadow clearly adores his wife, he also holds a very idealized view of her. He refuses to see the darkness inside Laura, and it’s obvious that he doesn’t really understand her. But when his wife suggests spicing up their lives by robbing the casino where she works, Shadow goes along with it. And when he ends up arrested for the crime, he protects her, hiding her involvement and asking only for a promise that she wait for him. A vow which, of course, Laura cannot keep for long.

It seems important to note that Laura Moon isn’t an evil person. She just isn’t a particularly good one. That she is miserable is obvious, but the narrative doesn’t ask us as viewers to accept her depression as an excuse for her actions. Instead, Laura just is who she is–a fully-realized person–and that person is fairly unsympathetic. She is manipulative, reckless and self-destructive. But she also has plenty of agency over her own life and the things she chooses to do. And she frequently chooses the worst possible path. She becomes more and more detached from her imprisoned husband. She cheats on Shadow for no reason other than that Robbie is there. And she does so knowing that it (and he) means nothing to her. Laura makes horrible choices, over and over again, and American Gods doesn’t ask us to see them as anything but bad things.

After her death, Laura is resurrected by way of a magical leprechaun coin thrown into her grave by a grieving Shadow. (Just go with it. It’s actually one of the least strange things that’s happened on this show.) But prior to her clawing her way out of the ground, we witness a minute or two of her afterlife. She comes face to face with the Egyptian god Anubis, and rejects his feather-against-the-weight-of-your-soul test outright. To be honest: This is probably because she possesses enough self-awareness to know that she wouldn’t pass it. But it’s another great example of the show presenting Laura honestly. Of course she’s not going to the good place. Dying young hasn’t remade her into someone she isn’t.  She knows that as well as we do.

And in the end, Laura isn’t given a second chance because she asked for one, or because she especially deserves it. She didn’t promise to suddenly become a good person, or beg for the opportunity to fix her mistakes. She doesn’t express anything that’s even vaguely adjacent to the concept of regret. Basically, her resurrection comes down to pure, dumb luck. In fact, at the exact moment that she’s sucked back to the world of the living, Laura’s in the process of rolling her eyes and snarling expletives at the God of Death himself. If we’re picking out people to get another shot at life, Laura’s probably one of the least deserving candidates.

And yet, in the end, dead Laura is pretty similar to the living version. Dying hasn’t suddenly erased all her flaws or gifted her with unprecedented wisdom. She isn’t magically a better person than she was before, or even trying to be. Her afterlife is still comprised of the same agency and self-awareness that her life was. She knows that she’s no one’s role model. Yes, Laura occasionally does the right thing now. (For example, freeing Salim from their bargain and telling him about the House on the Rock.) But the show is still honest about her willingness to abuse and manipulate those around her, as well as the selfish nature of desire to pin her future on Shadow because he made her heart beat for a moment.

If anything, death has perhaps made Laura’s motivations a little less strange to us as viewers. But it has in no way redeemed or validated her choices. She is not a likable character, but she is an infinitely compelling and watchable one because American Gods doesn’t actually ask us to like Laura, or root for her, or even sympathize with her to any great degree. That we do on some level at various points is a testament to the quality of the show’s writing and its commitment to representing Laura as the complicated mess she actually is.  This shouldn’t feel as groundbreaking as it does. After all, it’s a privilege afforded to male characters all the time. They’re allowed to be complicated and confusing and horrible and heroic, all at the same time. Women rarely get the same chance. And so even though we all probably hate Laura Moon half the time she’s onscreen, we should still applaud her presence.