Amber Heard has confirmed the rumors that she’ll play Mera, Queen of Atlantis and Aquaman’s wife, in the upcoming Justice League and solo Aquaman movies. Justice League Part One will be the first of the two, and filming for that starts in April. Preparations for that movie are well under way already, if this on-set Instagram photo of director Zack Snyder and Jason Momoa (Aquaman himself!) is any indication.

In a brief video interview with ET, Heard both confirmed her role and revealed a few scant details about Mera’s costume:

It’s interesting. It’s like, half suit of armor, half scales. It’s strange… We’re in the process of building it now, so it’s coming along.

Heard laughs and avoids eye contact while describing her costume, so … hopefully the finished product will be good? “Interesting” and “strange” don’t necessarily qualify as praise. Anyway, even if Amber Heard doesn’t like it, that doesn’t mean we won’t! It sounds from this like Mera’s costume might not be taking on a traditionally glamorous look — but I like “strange” clothes, myself.

The scales aspect definitely sounds like the costume will take inspiration from some of Mera’s other looks in the comics, but “armor” would be new. Here’s what Mera often wears — sometimes with long sleeves instead of a halter top, as pictured here. 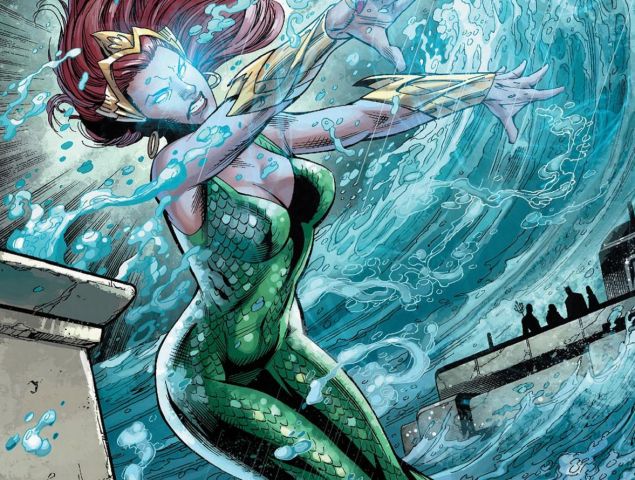 For those of you who have doubts about Zack Snyder’s take on the DC Universe, know that Aquaman won’t be his to direct — James Wan (of Furious 7) will helm the standalone movie. The script’s not yet done; it’s in “dual-track” development, meaning two writers are independently working on screenplays, and eventually one of those concepts will become the final film. David Leslie Johnson (The Conjuring 2) is crafting one, with Kurt Johnstad (300) writing the other.

What do you think about Amber Heard as Mera? Do you think she’s got what it takes to embody the undersea queen?

(via Blastr, image via Sci-Fi Now)