Amanda Palmer Thinks Kickstarter is the Future of Music 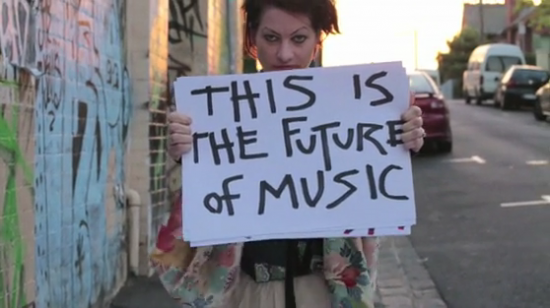 Though we’ve recently experienced a wave of Kickstarter funding famous video game legends and super neat gadgets, there is a wealth of other corners of the world that Kickstarter hasn’t impacted in a profound way just yet. Next up: Music. Amanda Palmer, formerly of The Dresden Dolls, and the wife of Neil Gaiman, has taken to Kickstarter for her new band’s new album, and believes Kickstarter is future of music.

Palmer put up the project for her new album on Kickstarter with a goal of $100,000, and with 27 days left as of this post, the project is sitting at $492,361, so, it would appear she’ll hit her goal quite handily before the May 31, 2012 deadline. As is par for the Kickstarter course, there are various tiers of worthwhile rewards for how much you’re willing to pledge. However, for a pledge of only $1, you’ll get a digital download of the entire album upon its release, including bonus songs and Kickstarter-related content. That’s a pretty darn good reward for a buck.

As she notes in the body of the post, her band is now without a label to throw money in her direction to help her make the best product she can, so, as is the Kickstarter way, she’s asking you guys to throw the money. In her adorable video, which is embedded below, she says that your money will help everything, from producing the album to going on tour.

If that isn’t one of the most adorable ways to ask for a ton of money, I don’t know what is.

One thing to note about the shattering of Palmer’s pledge goal is that she has one of the most faithful, cult followings in the current music landscape, which is also how Tim Schafer and Double Fine managed to smash Kickstarter records. Regardless of fan followings being largely responsible for making Kickstarter projects successful, most famous people that have fans could conceivably successfully use Kickstarter to fund a project by leveraging their fame. And if any genre of entertainment is known for obsessive followings, it’s music, and that could easily, ahem, kickstart the wave of music’s future on Kickstarter. Amanda Palmer certainly thinks so, and you love her, right?