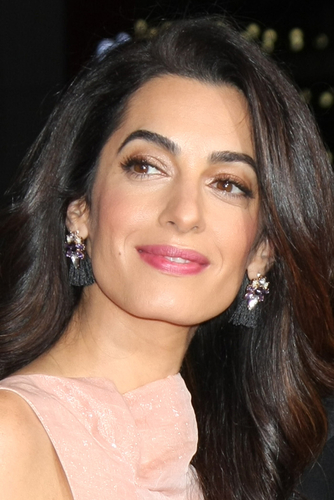 It makes a certain amount of sense for entertainment press to focus on the elements of a story related to the entertainment industry. So, I can almost (almost!) forgive an outlet like E! News, or Entertainment Tonight, or Hollywood Life for focusing on Amal Clooney’s husband or “baby bump” whenever she does anything. After all, it can’t be guaranteed that someone who cares about entertainment news also cares about world affairs (right? Apparently?). Less OK? When outlets like Time and BBC News do it. Makes the sexism more apparent, doesn’t it?

Yesterday, Clooney delivered a speech at the United Nations that was a call to action for the organization to back an investigation into crimes committed by ISIL against the Yazidis (an ethnically Kurdish religious community) in Iraq. Here she is after the speech, being interviewed by Reuters alongside client, activist, and Nobel Peace Prize nominee Nadia Murad Basee Taha, herself a Yazidi victim of the Islamic State.

As reported by E! News (thankfully, when they weren’t talking about her dress), here is a portion of Clooney’s speech:

“I am ashamed as a supporter of the United Nations that states are failing to prevent or even punish genocide because they find that their own interests get in the way. I am ashamed as a lawyer that there is no justice being done and barely a complaint being made about it. I am ashamed as a woman that girls like Nadia could have their bodies sold and used as battlefields. I am ashamed as a human being that we ignore their cries for help.

I am proud to sit beside this young woman whose strength and leadership astounds me,. She has defied all the labels that life has given her: orphan, rape victim, slave, refugee. She has instead created new ones. Survivor, Yazidi leader, women’s advocate. Nobel Peace Prize nominee. And now, as of today, Goodwill ambassador. I am proud to know you Nadia, and I am sorry that we have failed you.”

Pretty intense stuff. However, despite the importance of Clooney’s mission at the U.N, three things seemed to stand out for far too many of the media outlets covering it: the identity of Clooney’s husband, her fashion choices, and the fact that she’s pregnant. Never mind that she already had an international reputation as a lawyer before she even met and married her husband in 2014.

Here are some examples. You might want to keep a barf bag handy:

Entertainment Tonight
Headline: Amal Clooney Stuns in Yellow While Delivering Passionate Speech at the United Nations
Department: Fashion
Opening: “Amal Clooney is expecting twins, but the international human rights lawyer hasn’t missed a beat when it comes to keeping up with her high-profile career or sophisticated style.”
Note: I mean, I know they don’t exactly have an International News section, but COME ON. At the very least, they could’ve put this in their “Celebs” section and just focused on what she was doing rather than what she was wearing.

The Mirror
Headline: Amal Clooney is a vision in yellow as she shows off hint of baby bump in chic dress
Department: Celebs
Opening: “Amal Clooney was a vision in yellow when she stepped out in New York on Thursday.”
Note: They say “stepped out” as if she were in New York to go clubbing. What’s messed up is that The Mirror, tabloid though it is, does have a World News section. Yet it’s more important that she’s a “Celeb” in this case, because of who her husband is.

E! News
Headline: Amal Clooney Shows Baby Bump in What Could be the Ultimate International Women’s Day Poster
Department: News
Opening: “Frame it: Amal Clooney may have just won International Woman’s Day. The pregnant Lebanese-British human rights lawyer and wife of George Clooney was spotted leaving the headquarters of the United Nations in New York City Wednesday, showcasing her baby bump in a dark gray pencil skirt, short cropped blazer and gray and black striped pumps.”
Note: At least they tried to connect it to feminism? Somehow? But seriously, just the fact that the second sentence starts with “The pregnant” …

Again, these are generally the types of outlets where you’d expect this kind of frivolous reportage on a human rights lawyer’s appeal to a global organization on behalf of suffering people. But check out Motto, which is an extension of Time Magazine geared toward millennial women. They include video of her actual speech, which is great:

Original Headline: Amal Clooney Shows Off Her Baby Bump at the United Nations (on display in Time’s own tweet)
Updated Headline today: Amal Clooney Addresses United Nations on ISIS (Better!)
Department: Relationships (???)
Opening: “Amal Clooney was all business on International Women’s Day. The mom-to-be (who also happens to be married to George Clooney) stepped out outside the United Nations headquarters in New York City on Wednesday, showing off her baby bump in a dark gray pencil skirt and matching cropped blazer.”
Note: I want to know what fashion has to do with ISIL, and what either of those things have to do with “Relationships.” I mean, yeah if you’re talking about the “relationship” between the people of a country and a terrorist organization, sure. But something tells me the “relationship” that prompted this tag was Clooney’s relationship with her husband.

It all comes back to that.

In fact, BBC News addressed this pretty directly in a recent interview with her:

Amal Clooney says she doesn’t mind being known as George Clooney’s wife if it helps her publicise the plight of the Yazidis#BBCNewsSix pic.twitter.com/72gGm9l8fB

I’ve gotta say, I bristled when the reporter said, “You’re not just a human rights lawyer.” I know what she meant, but I’m also disappointed that BBC News of all places is playing into the fact that the thing worth talking about here is how Clooney’s work relates to her relationship to her husband.

Yes, it sucks that society as a whole doesn’t value work like hers as much as it values celebrity culture, so I understand the question. I might have even asked it for The Mary Sue, since we represent the intersection of feminism and pop culture in our work. (I probably would have asked if being married to her husband has hindered her work in any way.) However, surely a legitimate, mainstream news organization shouldn’t be perpetuating that by giving that angle attention?

And this could just be me being cynical, but I have a hard time imagining a version of this where a male world-renowned human rights lawyer who happened to be married to a Hollywood actress would be asked about her (or how her career affects his) at all.

Clooney’s career is her own, and she is doing real good defending the defenseless and using the law to help the most marginalized people in the world. She happens to be married to a man and also pregnant. Those are certainly not things of which she, or any woman, should be ashamed, but they also shouldn’t be the things that define her. We should all be defined by our actions, not our circumstances. Getting married, wearing nice clothes, and having children aren’t news stories. They are facts of Clooney’s life.

This isn’t the first time that this focus on Clooney’s husband, or looks, or clothes, or pregnancy from a “celebrity news” perspective has inspired pieces like the one I’m writing now. Yet it keeps happening. You’d think that outlets would’ve received the message a long time ago that reducing an accomplished woman to her relationship and appearance in the news, or having those things be the first words about her, is hugely sexist. You’d think that, by now, writers and editors would have learned to curb that impulse.

However, this would mean that they’d have to prioritize Not Being Sexist and actually make conscious choices toward change. Perhaps they’re not ready to do that yet. Being sexist is just way too comfortable.