This is the First Image From the World's Largest Telescope, Sort Of 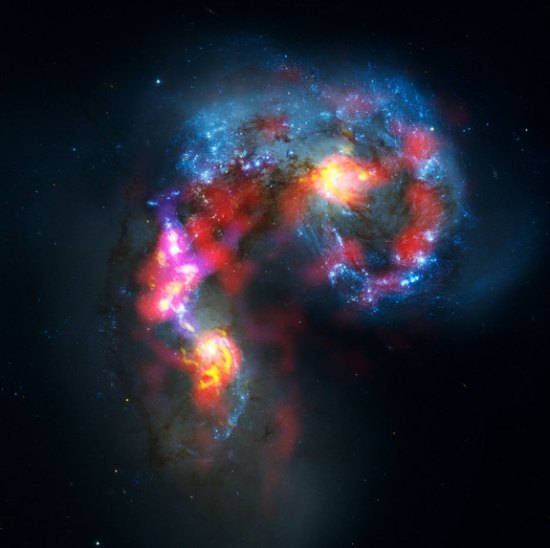 The largest, most complex ground-based telescope is just now coming online and has produced its first image. It’s called the Atacama Large Millimetre/sub-millimetre Array, or ALMA to its friends, and what you see above is the telescope’s first view of the colliding Antennae Galaxies. Sort of. Actually, only the red and yellow globby bits are from ALMA, the rest is another stunning photo from the Hubble Space Telescope.

You see, ALMA doesn’t look at the universe the same way as you, me, or the Hubble. It’s an array of 12 and 7-meter-wide radio antennas spread out over a 16,500 foot high plateau in the Chilean mountains. Eventually, comprising 66 antennas over 16km (apx. 10 miles), its current configuration of about a dozen antennas views the very, very long wavelengths of light — about 1,000 times longer than visible light. This allows ALMA to see very distant and very cold regions that were previously invisible.

Read on below to see how ALMA sees. 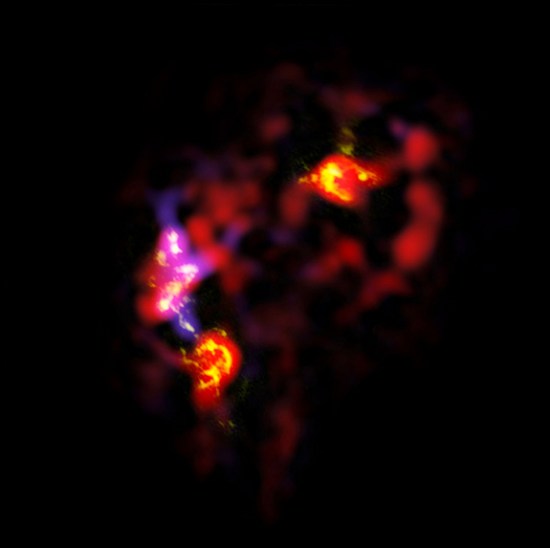 When ALMA peers into the Antennae Galaxies, it sees the dense masses of gas from which stars are eventually born. It may not be as dramatic as the composite image with the Hubble, but with ALMA, scientists will be able to see further and deeper into distant gas and dust clouds than ever before. Some of the 900-odd scientists that have already sent in requests to use the array are hoping to gain a better understanding of how our own solar system formed, how stars are born, and how to peer inside the dust clouds that surround the super-massive blackhole at the center of the Milky Way.

In order to do all that, ALMA will bring dozens of dishes to bear when it begins scientific observations later this year. Backing those up is an incredible supercomputer called the ALMA Correlator that’s capable of performing an astounding 17 quadrillion operations per second. The individual dishes are also reconfigurable thanks to massive 28-wheel, 130-ton self-loading haulers.

Though ALMA imagery will improve, I don’t think they’ll be the kind of thing everyday people will swoon over. However, astronomers and scientists will have a powerful new tool to learn about the very origins of the universe, and that’s worth more than a pretty picture.