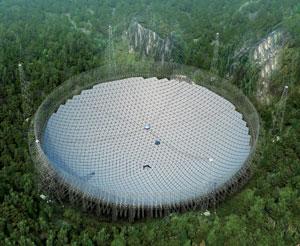 Currently, the title of world’s largest radio telescope belongs to the Arecibo Observatory in Puerto Rico, but by 2016 that is slated to change. China has begun construction of a radio telescope with 3x the capabilities of the Arecibo Observatory in a remote part of the Guizhou province in southern China. Expected to take four years to build, the Five-hundred-meter Aperture Spherical radio Telescope (FAST) will be the most advanced telescope of its kind.

FAST will contain a set of motors to change the shape of the dish’s reflective surface so it can scan large sections of the sky. Able to see 3x further into space than the Arecibo telescope, astronomers predict FAST will uncover new galaxies and deep-space objects of a distance of up to 7 billion light years away.

The key difference between the Arecibo telescope and FAST is that the Arecibo dish is fixed in a spherical curve that focuses incoming radio waves to a line above the dish. This line is focused to a point by secondary and tertiary mirrors that hang over the dish. Once in a point, the waves can be analyzed. This means that only 221 meters of the 305 meter dish are being used at a time.

Rather than focus incoming waves with overhead mirrors like the Arecibo dish, the FAST dish itself can focus the signal. The dish will be made of 4,400 triangular aluminium panels, which will be connected by nodes that can be moved up or down by a motorized system to change the shape of the dish’s surface. A subset of panels on the dish’s surface will be capable of moving to form a parabolic mirror 0f 300 meters (nearly the total size of the Arecibo dish). This sub-dish can assemble anywhere on the larger dish’s 500 meter surface, allowing FAST to track objects and study space from a significantly wider point of view.

FAST will also feature a receiver hanging above the main dish making it capable of studying 19 specific regions of the sky at the same time on different bands of the radio spectrum. This far exceeds the ability of the Arecibo dish which can only study seven regions of space at a time.

The Guizhou province location was selected based on the region’s karst depressions, or sinkholes that form from water eating away at the limestone bedrock. Researchers, led by Rendong Nan at the National Astronomical Observatories (NAO) in Beijing used satellite images and aerial surveys to analyze the landscape of the Guizhou province.

Ultimately the location chosen was a remote 800-meter-wide karst surrounded by mountains that should be far enough away from major population zones to be free from interfering radio signals. To mold the karst into the dish’s hemispherical shape, workers will have to remove a million cubic meters of soil. Construction on the project began in March 2011, and should be completed by September 2016.