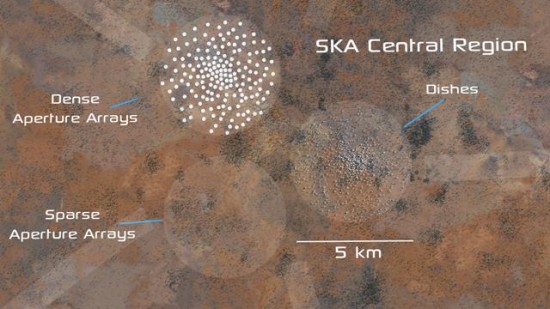 On Sunday, plans were announced for what will be the world’s largest radio telescope: The Square Kilometer Array, or SKA. Once built, the thousands of radio detectors that make up the SKA will act as one giant radio telescope over 1km wide. A $2.1 billion project, the array will give scientists an unprecedented view of the early universe, allowing them to investigate early galaxy development, dark energy, and the properties of super-massive black holes, among other subjects.

In addition to subjects of deep physics, the SKA will also be a new tool in the search for extraterrestrial life. The size of the SKA will make it easier to observe developing planets, and learn how Earth-like planets came to be. It can also search for radio signals from other worlds, some as weak as television signals. And with the SKA’s size and sensitivity, it will be able to observe 1,000 times more of the galaxy and in a greater range of frequencies.

Unlike other arrays of radio telescopes, like the Very Large Array, the SKA will consist of three types of detectors. The first are 3,000 15 meter wide radio dishes we’re used to seeing, as well as sparse and dense aperture arrays. The combination of detectors will allow the SKA to observe frequencies from 70 MHZ to 10 GHZ. Additionally, the SKA will use a unique arrangement of radio wave receptors, with a dense inner core and detectors spiraling outward in five arms some 3,000 km away from the central core.

Originally conceived in 1991, the SKA is hoping to be partly operational by 2020 and fully operational by 2024. In the meantime, both Southern Africa and Australia have constructed testbed telescopes and are competing to be the final location for the array. A selection is expected to be made by 2012, with construction beginning in two phases afterward. Though it is still a long way off, and many years in the making already, the scientific potential of the SKA seems truly remarkable.