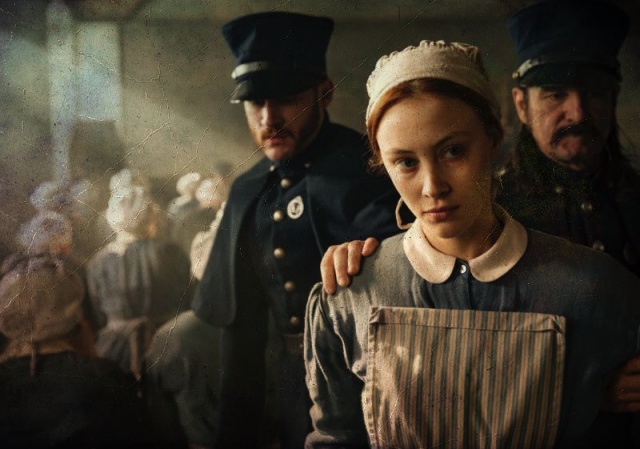 After the amazing, critically-acclaimed success of Hulu’s The Handmaid’s Tale, it was no surprise that more of Atwood’s works would be getting the streaming service treatment. Netflix decided to get their piece of the Atwood pie by adapting to screen another one of her works, Alias Grace, a historical fiction novel based on true events about one of Canada’s most infamous alleged murderers, Grace Marks.

The biggest thing about the Grace Marks story is that the abuse and torment of women within the series, while fictionalized, is based on the actual things women would face.

The historical facts as we know it, via the internet, are that Grace Marks (played by Sarah Gadon) was a poor domestic servant who had immigrated to Canada from Ireland with her family. Along with another Irish man, James McDermott (played by Kerr Logan), she was convicted of murdering her employer, Thomas Kinnear, and his housekeeper, Nancy Montgomery (played by Anna Paquin). Marks was eventually set free after 30 years of imprisonment and vanished from the historical record. Everything in between…a mystery.

In the show, Grace enters the series already imprisoned for murder with her alleged accomplice already having been executed. People in high places have been working to having her pardoned, believing that she has suffered enough and the evidence against her is inconclusive. Dr. Jordan (Edward Holcrof) has been hired to do an examination of Grace’s memories to see if her alleged amnesia of the murder holds true and if he can unlock her secrets.

The narrative switches between Grace telling her backstory to the good doctor having some shady inner-monologues about what he has the right to know. We see Grace as the eldest of several children forced out of her home by her father (who has sexual desires towards his daughter) to make a living and living with the cold reality that as a woman she is expendable to the world around her. If The Handmaid’s Tale is a look forward to a potential future, Alias Grace is a reminder of where we have come from.

The world of Alias Grace is one where women have no access to safe abortions or birth control and are susceptible to the whims of men’s desires, their only choices either to give into it and accept some temporary privileges along with social disgrace, hoping no baby comes from it, or risk being raped by a man who has the law and society on his side.

Gadon plays the different parts of Grace very well, from the young wide-eyed ingenue of 12 to the hard woman who has spent 15 years of her life imprisoned and at the whims of gross guards and doctors at mental wards who treat her like nothing more than a piece of meat.

While not all the men in the story are bad, they all suffer from some privilege or internalized misogyny that makes them treat Grace more like a thing than a person, and the other women are not free of that either. Anna Paquin’s Nancy is very temperamental and uses her class privileges as a “lady of the house” to inflict some pain on the lower-class workers, while at the same time facing town scorn for being unmarried. She fears to lose her position of favor to Grace because that is the only thing that gives her power, therefore the only other woman in her life must become her enemy.

It is a beautifully shot and well-written story that does amazing work with few sets, makes the most of its talented cast, and has no filler or dragging. Also, you can use all of those Mindhunter skills you gained to figure out decide if you think Grace is a victim or a villain.

Alias Grace is a mystery wrapped in a strong tale of immigrants, women, and a reminder of a past we do not want to go back to. The series is now streaming on Netflix and is only 6 episodes so get to binging! Also, true crime fans, were you as shocked as I was that My Favorite Murder hadn’t covered this yet?