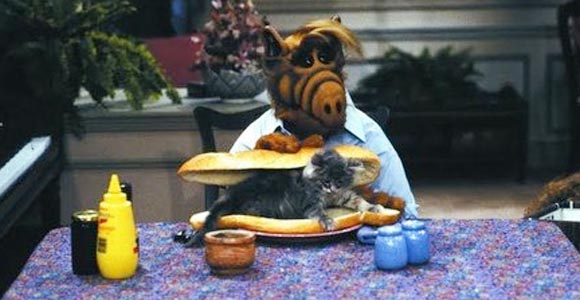 We warned you an ALF reboot was imminent, now it’s been confirmed. Sony Pictures Animation has inked a deal with show creators Tom Patchett and Paul Fusco to create a CGI/live-action hybrid film of the hairy alien. I kill me.

Jordan Kerner, the producer of The Smurfs movie, is set to bring ALF back to life. “[Executive Producer Kenneth] Kaufman, who runs Alien Production with Patchett and Fusco (the trio are the ALF rights holders), is a former producer of TV movies and used to be a producing partner of Kerner’s,” writes the Hollywood Reporter. “It was that relationship that paved the way for the feature project.”

The original television ran from 1986-1990 and featured Fusco doing the voice and pupeteering for ALF. The alien was quite the comedian and made himself a home with the Tanner family on Earth.

Back in May, Fusco was entertaining the idea. “I think the timing is right. That’s a big important thing, timing,” he said. “There have been movies out there of characters that I didn’t think were on the same parallel as ALF that got movies made, so I think it’s time. I think it could be a home run on a lot of levels.”

No writer or director are attached at this point but hopefully Fusco will be involved in at least the writing aspect and definitely voice acting. Not that I’m looking forward to a rehash of this franchise at all but I’m really not looking forward to them making ALF a CGI character. It’s the puppet that makes it great.