Is ALF The Next 80s Icon To Get A Hollywood Reboot? | The Mary Sue

Is ALF The Next 80s Icon To Get A Hollywood Reboot? 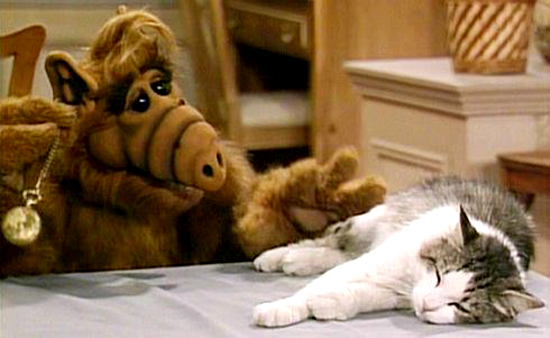 Ok, now they’ve gone too far. It wasn’t enough Hollywood rebooted The Smurfs and Alvin and the Chipmunks, now they’ve got their sights set on ALF! And creator Paul Fusco is all about it.

For those of you too young to remember, ALF (that’s a simplified way of calling something an Alien Life Form), was a sci-fi sitcom that lasted four seasons on NBC. It starred ALF, a puppet, who hailed from the planet Melmac. He crash lands in the garage of the Tanner family on Earth who decide to take him in and keep his existence a secret from an alien task force. Hilarity ensues. Oh, and he loves to eat cats (a common Melmac food), though he never does during the series.

Fusco has yet to pitch to studios but has been working on the new project for some time. “I think the timing is right. That’s a big important thing, timing,” he told The Hollywood Reporter. “There have been movies out there of characters that I didn’t think were on the same parallel as ALF that got movies made, so I think it’s time. I think it could be a home run on a lot of levels.”

Fusco was not only the creator of ALF but his puppeteer and voice on the show.

I’m of two minds. In general, I don’t like the idea of reboots but they can be good if done well. Obviously The Muppets was the perfect storm but I enjoyed things like the recent A-Team movie. Then again, I’d burn Hollywood to the ground if they ever tried to redo Back to the Future so I guess it really depends. What do you think?