Monkeys Show Alcohol May Boost Your Immune System, Your Post-Christmas Hangover Isn’t for Nothing

Your immune system is like Jackie Chan in Drunken Master. 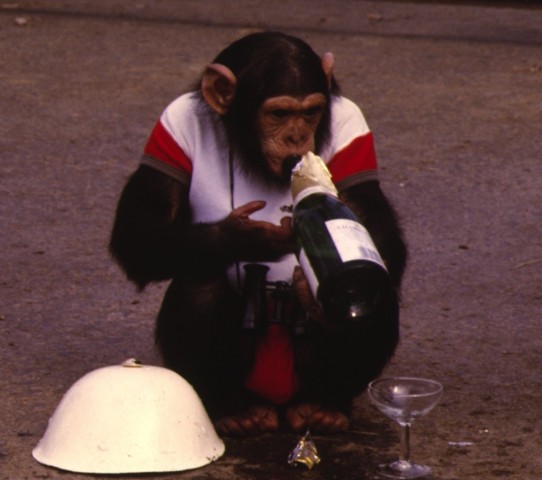 If you had a few Christmas drinks to help you deal with your family yesterday, you may have actually been doing yourself more of a favor than you thought. According to a study recently published in the journal Vaccine, moderate drinking boosted response to vaccination in monkeys. Cheers.

This is probably good news for anyone working through a bit of a hangover this morning, and as long as you weren’t the one who embarrassed everyone and gave oddly lingering hugs at the end of the night, you probably did yourself some good. You’re also right for laughing about that guy on the ride home, because according to the study, his immune response would likely have been diminished. Amateur.

The study, headed by Ilhem Messaoudi of the School of Medicine at the University of California, Riverside, allowed a group of macaques to drink as they pleased. Some of them had better self control than the token slobbering drunk guy at your Christmas festivities, and those moderate drinkers exhibited an enhanced immune response to vaccines they were given.

How do you know if you’re a good, responsible talking monkey—erm, human? The National Institute on Alcohol Abuse and Alcoholism defines it as less than 4 drinks in a day and no more than 14 in a week for men and 3 daily or seven weekly for women. Any more than that, and your immune function will actually drop—based on the monkeys’ vaccine response.

Just think of it like Jackie Chan in the Drunken Master movies: a little alcohol gives your immune system crazy fighting skills, but too much just makes it a sad mess that gets banned from ever using the drunken style again by its father. Then, it has to prove that it can handle itself and perfect its drunken boxing to save the—wait, what were we talking about?

Oh, right. Alcohol can boost the immune systems of monkeys, and since we’re basically monkeys, we’re going to go have a drink.