It's hard to put the past behind you when it turns into a zombie and follows you home. 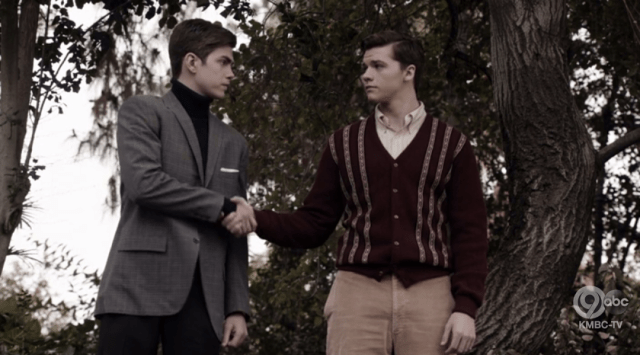 We have a tendency to go into a bit of a mid-season slump with AoS in terms of story fluidity and general writing, a trend that began last episode and continues into this one. I wouldn’t call it bad so much as uneven, as there’s some last-minute backstory insertion and lazy character writing happening in Hydra, but then some really good (and much-needed) character work going on around Team SHIELD. Throw in the promise of a Secret Warrior mission, and while I might not be terribly high on this one, I’m already bouncing in my seat for next week.

While Yeerk!Ward hosts a cult meet ‘n’ greet so he can reveal his true form to the faithful (tentacle-dreads!), Malick takes a trip down memory lane to that one time he chickened out of a pact with his brother and kinda-sorta got him sent to the Desert Otherworld. Yeerk!Ward (I guess I can just call him Hive at this point) is taking a similar stroll, seeing as how he briefly possessed Malick’s brother and retains all his angry, festering memories. I’ve been viewing Hive as a frighteningly cold, level-headed antagonist, but all those swirling memories and personalities suggest he might be a lot more volatile than expected. Watch yourself, Phil. Ward’s still in there and he can’t be happy with you.

Malick spends the entire episode convinced Hive is out for revenge, and he’s right, but—surprise! turns out exposing his cowardice in front of his only child, then killing her, and then insisting they’re gonna be BFFs from now on is waaaay more vengeful than just killing him. I’ll give AoS credit for the unexpected twist, but it also marks our second fridging of the season, and this one’s pretty sloppily managed (we saw Stephanie for all of 60 seconds a couple weeks ago, meaning they introduced her specifically so they could murder her and shake up Malick’s relationship with Hive—and via a gross Kiss of Death, no less!), so I’m docking them some major points for that one. And thus April 2016’s proud tradition of killing off female characters continues.

Speaking of festering memories and vengeance, Coulson now gets to deal with all those repressed feelings about murdering Ward, throwing himself and his team into intelligence-gathering missions so he can avoid the emotional ramifications of knowing he crossed his own moral line. Fitz frames it as a “big picture” issue and argues that Coulson did the right thing, but for Coulson it’s about his personal motivations—about why he did it. The ends have always been his justification for all the morally gray means, but he doesn’t feel he has that this time, and it leaves him shaken.

Aaaand speaking of shaking (I am the master of the segue!), Ol’ Shake ‘n’ Bake get sent on a mission to gather some possible intel from an exiled potential Inhuman, James, an abrasive Australian who didn’t take kindly to all the secrets Jiaying was keeping from them. He’s got a Kree Dragonball on hand, which (according to the archives) was taken from the Kree by “Alveus,” an Inhuman originally designed to command the Kree’s Inhuman army who then turned on the Kree and led the Inhuman Rebellion. Hive, you just get more interesting every day, doncha?

Along the way James drops all kinds of tidbits about the “mess” Lincoln was in the past, which eventually leads to him coming clean with Daisy about the fact that he almost killed his last girlfriend in a drunk driving accident. It’s a good scene that not only calls out that Lincoln is intentionally trying to be “Mr. Perfect” (i.e., Boring) around Daisy, but also makes him sympathetic and … interesting? … this week? I know, I was confused too. But pleased! Hopefully AoS can keep that trend going. 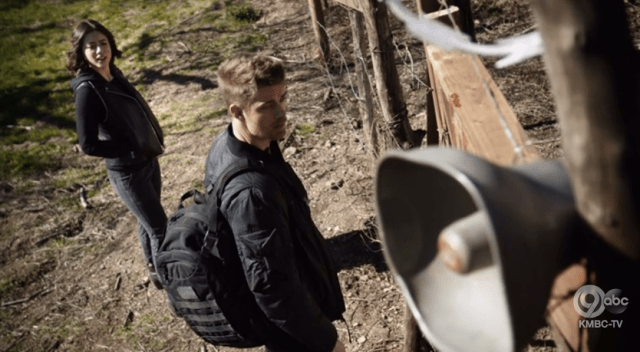 Nothing clever to add. I just think this is a really good shot.

The two have a serious conversation about the importance of honesty (one of this week’s ongoing themes, right alongside vengeance, fear, and the inability to hide from one’s past), and Daisy in turn tells Lincoln about her second, bloody vision of the dead team member in space.

Which brings us back to our other SHIELD mission: Recon at an agro-chemical facility tied to the Transia company (the one Hydra took over last week). While Simmons pieces together a theory about their enemy’s true form (a bunch of swarming, hive-minded parasites, in essence), Coulson and May go after Giyera to figure out what Hive is trying to steal—or possibly hide—from this agro-chem company. Given that they were studying ways to make plants and animal resistant to “invasive species,” it’s highly likely Hive’s got a major weakness he’s trying to cover. More on that in the future, no doubt. 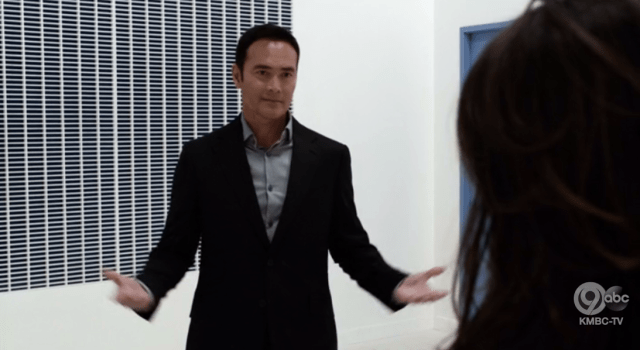 Confession: I kinda like Giyera, and that’s 100% Mark Dacascos’s fault for giving him dry little gestures like this.

May takes out Giyera in a neatly staged fight sequence in an empty white room, but SHIELD security just ain’t what it … no, actually, it’s about exactly where it used to be. Giyera escapes, takes out the team (poor Phil and his RoboHand …), and somehow manages to remotely land their plane as he’s doing it. This seems like cheating.

So, uh … pretty much our entire team just got captured. But not to worry! We’ve got two Inhumans on the way, and while they may have cleared up the secrets between them, they’ve got a few others that might just save the day. The episode had its definite weak points, but I am super hype for the next one.

I’m in transit and short on time, so I’ll leave the post-episode chatter and analysis to you lovely readers in the comments. I expect a 500-word essay on the thematic significance of Paradise Lost and no less than three bad puns. Pokemon references are, as always, worth extra credit.

Now I’ll leave you with this screenshot of two besties bein’ cute together: 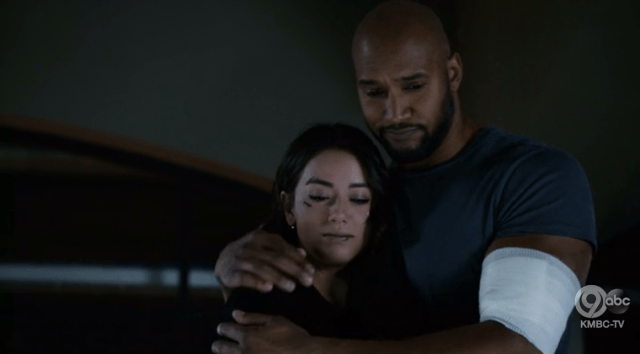 And we’ll talk again next week.