Review and Exclusive Artwork From Adventure Time: The Art of Ooo

His hat is AWESOME!!! 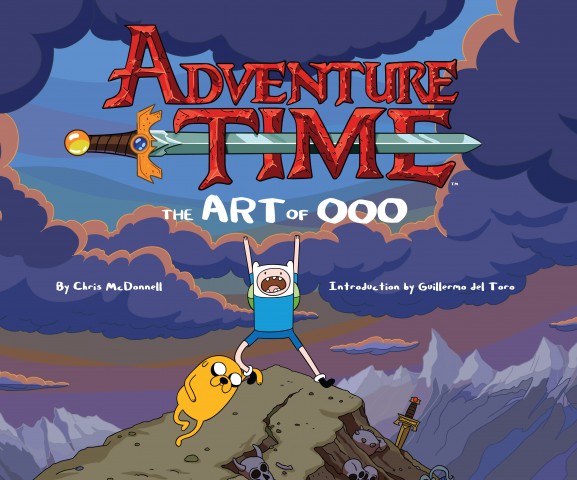 A few weeks back, we showed you the recently published Adventure Time: The Original Cartoon Title Cards, an art book that breaks down the creation of each of the opening tableaus from the first two seasons of Adventure Time for your nerdy and over-analytical pleasure. But if you know the show, you also know that there’s so, so much more to explore—and this massive new book curated and written by animator Chris McDonnell is sure to help you do just that.

Readers, if I had a week to sit down with each of you individually and point out every cool little tidbit of information or art in this book, it would still not be enough time—each of its 352 pages is crammed to the gills that Susan Strong probably doesn’t have with pure, unadulterated amazingness. There’s the pitch bible Pendleton Ward first sent to Cartoon Network after Nickelodeon declined to take his original Adventure Time short to a full series; how-to drawing guides that lovingly describe Finn’s arms as “al-dente noodles”; concept art of everything from the smallest ancillary Candy Kingdom citizen to the largest panoramic cityscape; storyboards, scripts, and notes for episodes of the series; gorgeously done fan art and comic book covers from the Boom! Studios series; and thousands of little easter eggs to pick up on.

Now, while you might be coming for the wonderful art, you’re certainly going to stay for all the stuff within the book that you can actually read, starting with the wonderful introductory note by none other than professional Totoro impersonator (and also talented director too, I guess) Guillermo Del Toro, and continuing on to interviews from the cast and crew. This includes a particularly interesting bit about how Princess Bubblegum voice actor Hynden Walsh sees her character’s relationship to Marceline (it’s not necessarily what you think, but it’s still utterly fascinating).

But it’s the insight from the show’s writers that really sticks with you—such as this bit from Jesse Moynihan, on the subject of why Adventure Time is willing to take its young audience members to some very dark and mature places (from page 234):

“It’s fun to drop cosmic bombs on kids and to make it feel as real and legit as possible. I’m pretty sure kids like to get their minds blown. They want to engage forces that are infinitely bigger than themselves. At least that’s how I felt as a kid, and how I still feel.  You can address the heaviest questions and use them in the context of adventuring and humor. The weight of those questions serves to deepen the enjoyment of the adventure. If you nail the right proportions of fear, then you’ve got a gem of entertainment, I think. It also helps to have an opinion on all this stuff while you’re writing it.

I can always detect a phony when they write generic stuff like ‘Use your heart.’ What does that mean? Use your heart. It doesn’t mean anything by itself. Using your heart has to apply to the character’s specific personal experience, or to a specific idea of where ‘the heart’ comes from in relation to the birth of the universe. Then ‘Use your heart’ means something.”

But anyway, back to that incredible art I was talking about: one of the most interesting aspects of The Art of Ooo is the wealth of doodles, concept art, etchings, ink drawings, and unofficial concept work for the series. So far, my personal favorite is this doodle of Princess Bubblegum dressed as Daenerys Targaryen that I found in the margins of the concept art section—if that isn’t remarkably relevant to my interests, I don’t know what is. But there’s a lot—and I mean a lot—of details to love (I mean, heck, the Cosmic Owl gets two pages all to himself; the Earl of Lemongrab and his various lemon mutants, of course, get several), including the below never-before-seen work by storyboard artist Seo Kim. 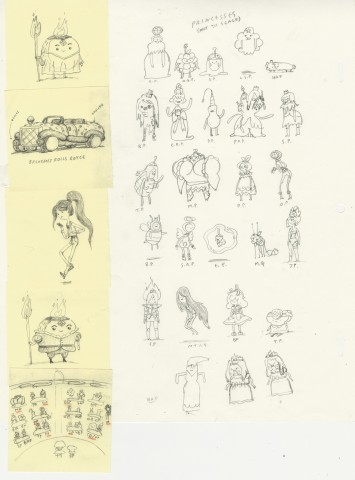 (click to embiggen)
Exclusive concept art of the many Ooo princesses by Seo Kim. The BREAKFAST ROLLS ROYCE! I am smitten. 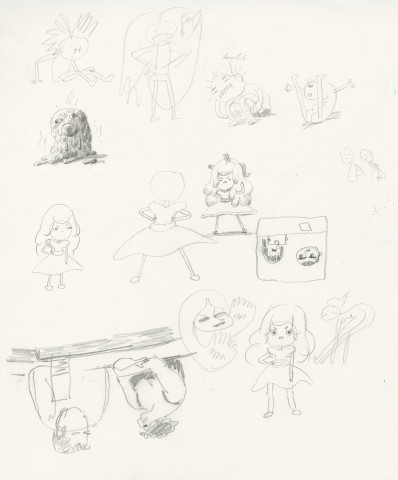 As with the title card book, this is the sort of companion work that fans obsessed with “making-of” stories will not just enjoy, but straight-up salivate over. It releases next week on October 14th, and if you’re a die-hard fan of the show with a penchant for exploring the creative process, you owe it to yourself to pick it up. You know, if you can. It’s pretty heavy. You might need to do some sick amounts of adventuring to level up first.