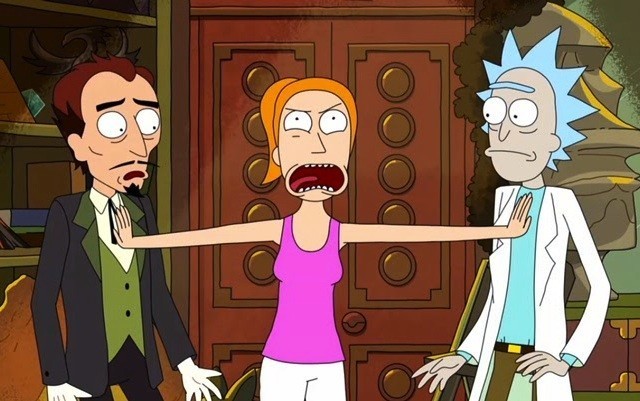 We’ve talked a lot about the depressing scarcity of female writers in film and television. Often, we try to give people the benefit of the doubt and talk about the “unconscious bias” that permeates every industry. But sometimes, people’s biases are very, very conscious. So conscious, in fact, that they’ll display their ignorance willingly and willfully in public.

A few days ago, Buzzfeed did a report on Adult Swim, in which several former employees came forward anonymously to talk about the enormous gender disparity among writers for their shows. While they definitely were not happy with the general work environment for women, they were very specific about the fact that the problem is due, in large part, to Adult Swim’s executive vice president and creative director Mike Lazzo, who has made no secret about his reluctance to hire women to write their shows.

One former employee mentioned that Lazzo had once said at a 2011 meeting of Adult Swim and Cartoon Network employees when asked if Adult Swim had any shows with female creators in the pipeline that “when you put women in the writers room, you get conflict, not comedy.”

How bad is the situation at Adult Swim? Of the 58 series or miniseries they air, only 1 out of every 34 writing credits went to a woman. To put that in perspective, the average for television in general is 1 out of 5 for the 2015-2016 season. With numbers that low, one would expect whomever’s running the ship to recognize that there’s a failure there and to promise to do better. Sadly, Lazzo took to Reddit not to make any such promises, but to justify his position.

In an attempt at “clarification,” Lazzo said, “”women don’t tend to like conflict, comedy often comes from conflict, so that’s probably why we (or others) have so few female projects.”

Yes, female writers hate conflict, because when a writer is female, she suddenly forgets how stories work. Especially when she’s on her period. /sarcasm

He then admits that “Nonetheless this was a dumb answer to a good question as Lucille Ball and Gilda Rather to Amy Poelher and Amy Schumer prove my statement a load of generalized nonsense,” but doesn’t really say that he plans on doing things any differently.

And then, in response to the former employees in the Buzzfeed article who talked about him being unapproachable, Lazzo writes:

I have always been very accessible to every person at work because I personally benefited from working at a company that allowed anyone, from any position, to pitch an idea-as long as the person was prepared to back up their ambition by doing any work required to justify the time or expense. If unnamed sources want to complain, complain about me after I’ve read the script you asked me to read or tossed you out of my office for pitching something I didn’t like. If you did come to me I bet I offered some decent suggestions on how to accomplish whatever you wanted to do.

I do sometimes yell and I’m not proud of it. (Inherited.)

Um, if you’re yelling at people at work, and your response to the fact that several employees have said you’re unapproachable is to say how wrong they are, insist you are approachable, then describe how you “toss people out of [your] office for pitching something [you] didn’t like,” guess what? You’re not as approachable as you think you are.

This also hints at another element of Lazzo’s bias. In the Buzzfeed piece, they report that “other sources agreed that Lazzo was ‘a yeller,’ although one person said ‘in Mike’s defense’ that the executive ‘welcomed’ it when employees yelled back at him. It was not uncommon to hear Lazzo and other supervisors shouting at and openly reprimanding employees.”

First of all, why would anyone want to create a work environment where yelling is the acceptable norm? Secondly, boys and men are generally taught that being an asshole is totally okay. It’s seen as “assertive” and “confident.” Women and girls are taught to be deferential, to nurture, to coddle, and to make the world comfortable for men, and if they are “yellers,” they’re seen as bitches and shrews. A work environment in which yelling is encouraged is marking itself as anti-female if it exists in a society that frowns upon women doing the very thing you’re encouraging in the office. You’re basically being very explicit about letting the world know that “anyone” can get ahead in your company…so long as they’re good at behaving in a way that women historically are taught not to behave.

This whole “women aren’t funny” thing is not only getting tired, but it also makes me question people’s judgment when they make a statement that so clearly ignores actual reality. I’m also getting tired of women getting put off for later, especially since Adult Swim apparently makes racial diversity a priority. According to one of the former employees in the Buzzfeed piece, “It was like, ‘How can we get more voices, more people to be a part of this?’” However, in practice, “more voices” really just means men of color.

Master Yoda had some really sound advice for this white guy long ago in a galaxy far, far away. I’d advise the (mostly) white men in decision-making positions in Hollywood to really listen to these words and take them to heart when it comes to implementing actual solutions to make your shows and films more female-inclusive. White guys enjoy Star Wars, right? Isn’t that totally a white male thing to like?

In any case, you might be tired of hearing about things like “diversity” and “inclusivity.” Well, I’m tired of sexism and racism, so…maybe the best way not to hear about it anymore is to do what you can to stop having it continue to be a problem, amirite?

(via Polygon, image via Cartoon Network)