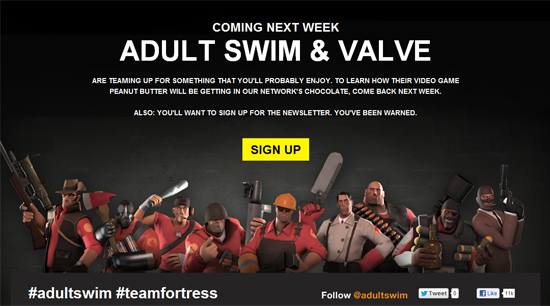 Or at least, they have announce that they will be announcing something next week in regards to their collaboration. What we do know is that it has something to do with the Team Fortress franchise, Adult Swim‘s network chocolate, and Valve‘s video game peanut butter. From that we can infer that it will be delicious and potentially edible. I am ruling nothing out until I am absolutely required.

Speculation is already rampant of course. I am personally in favor of a Team Fortress-based animated series. What was the Heavy up to as a child? When and where did the Demoman lose his eye? The possibilities for cartoon shenanigans are endless. Plus, the series of shorts produced by Valve about the various classes were fantastic. More of that is certainly a worthwhile endeavor.

Or it could be a game in traditional Adult Swim attire but with the Team Fortress characters. Perhaps a 2D platformer where the Soldier has to plow through dozens of enemies to capture the flag. Or maybe it would be an arena-builder as the Director that can then be played by Team Fortress 2 players once finished. We’ll just have to wait a week and find out.

Folks can also sign up for a newsletter to receive more information as it becomes available. Excitement? Excitement!