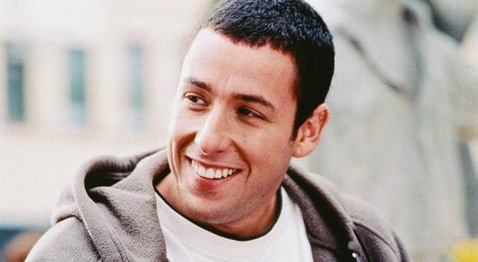 Good morning, readers! Allow us to present a story that will leave you either scratching your heads or throwing a heavy object at the wall: Columbia Pictures and Hasbro have announced that the Candyland movie they’ve been working on (the one based on the board game — that has been described as “an operatic, ‘King Lear’-like civil war in a kingdom that just happened to be made completely out of candy” — has found a production partner in Happy Madison Productions. That would be Adam Sandler‘s production company. And if you’re wondering if it’s going to star Adam Sandler … then you have wondered correctly. Wow. What to do about all these mixed feelings I’m having.

With the announcement that man-boy clown Adam Sandler — and I actually mean that kindly — was to take a leading role in this movie, this kind of threw a wrench into the gears for what was supposed to be a “Lord of the Rings, but with candy” kind of movie. See, that makes it sound like it was intended to be a family-friendly epic — but with candy. Maybe Columbia and Hasbro realized that sounded ridiculous. As ridiculous as calling it “King Lear — but with candy.” But attach someone like Adam Sandler to this? “I’m crazy board-game movie makin’ guy! Gimme some candy!”

See, I have a soft spot for Sandler. Ever since SNL, and then ever since Billy Madison, and especially since The Wedding Singer. And while I realize he has made some horrible, horrible movies lately, I feel like it’s the movies that are bad, not Sandler. (Come on, Funny People! He wasn’t bad in that!)

Columbia Pictures President Doug Belgrad had the following to say:

“Candy Land is more than just a game. It is a brand that children, parents and grandparents know and love. The world of Candy Land offers an extraordinary canvas upon which to create a fantastical, live-action family adventure film with a larger than life part for Adam. We are thrilled to partner with Hasbro and Happy Madison on this project.”

Okay, I’ll bite. This could either be a trippy, crazy kids’ movie that will be weird enough for open-minded adults to tolerate, or it will be a gigantic flop. Board game-based movies can be tricky (because look how, um, awesome Battleship looks, you guys). Who knows? The script will be written by Sandler and former SNL writer Robert Smigel. And the director, Kevin Lima, did Enchanted. It might have a fighting chance! As long as Rob Schneider and Allen Covert aren’t involved … which they will be.

You know what this movie will be missing? Judd Apatow.