This Is Why We Can’t Have Nice Things: Guy Claims That GTAV Made Him Want To Steal Actual Cars

Dude, quit it. You're ruining things for the rest of us. 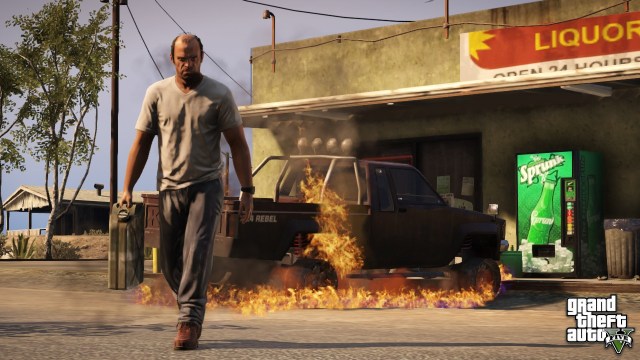 Another day, another person complaining that video games make people do violent stuff — except this time it’s not a member of congress but an actual person who did violent stuff and got caught. Man, you know you’re screwed when your best defense comes from a very special episode of Law and Order: SVU.

The person in question, 20-year old Zachary Burgess, was arrested by Baton Rouge police this past weekend after hopping after a car just as the owner got out and driving away with it while the female passenger was still inside. He also hit several other cars in the attempted escape, but was stopped by witnesses at the scene until the authorities arrived. See, that’s how you know you’re not in a video game — the NPCs are actually useful. Upon questioning,Burgess told investigators that he wanted to see what it would be like to play Grand Theft Auto in real life.

Listen, we’re not completely unsympathetic to the phenomenon of confusing reality with video games. I’m not going to lie, I have wandered around the streets of SoHo after too much Assassin’s Creed II and thought, “Yeah, I should totally climb all up on those buildings.” You know what the difference is? I don’t actually do it, because doing the stuff that’s fun in games ends up not being so much fun in real life. If it were, we’d all be cooks and farmers and rockstars without any of the dumb practicing — and those are just the video games that don’t involve kidnapping defenseless women for funsies. What’s more likely is that Burgess was the type of person who doesn’t much care about others safety in the first place, and is merely using Grand Theft Auto as a convenient excuse because of how heated the debate over violent video games has become.

Nobody was seriously hurt, which is good, but hopefully this doesn’t mean that Burgess will get off light for the terror he must have caused. It didn’t work on SVU, after all. Eliot Stabler is not going to stand for that kind of weasel move.