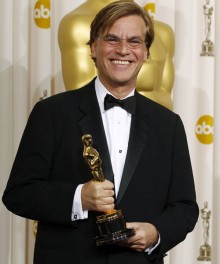 We knew Ashton Kutcher will be playing Steve Jobs in an indie biopic, and we also knew Sony was planning a rival Steve Jobs movie. It turns out Sony has brought in the big gun to pen their rival flick, as Aaron Sorkin is now set to pen the screenplay. It’s obvious we’re big fans of Sorkin here at Geekosystem, slipping in mentions of Sports Night, Studio 60 on the Sunset Strip, and his upcoming HBO show The Newsroom whenever we can (just like that, actually!), so we’re thrilled that he’ll be handling the movie adaptation of the life of Steve Jobs. After all, he did a pretty solid job handling another famous tech figurehead, Mark Zuckerberg, in his Facebook movie, The Social Network. You may have seen that.

Co-chairman of Sony Pictures Entertainment, Amy Pascal, had this to say about Sorkin penning the Jobs movie:

“There is no writer working in Hollywood today who is more capable of capturing such an extraordinary life for the screen than Aaron Sorkin; in his hands, we’re confident that the film will be everything that Jobs himself was: captivating, entertaining, and polarizing.”

Sorkin’s been on a roll as of late, winning an Oscar for best adapted screenplay for The Social Network, and being nominated for a best writing Oscar for the stellar Moneyball. He’ll almost assuredly be able to bring his writing magic to the Jobs movie. The Kutcher Jobs movie, on the other hand, should be releasing long before the Sorkin one, so at least we won’t have dueling Steve Jobs movies to deal with.