Gamma Ray Burst Irradiated Entire Planet In 8th Century, Would Mess Us Up If It Happened Today 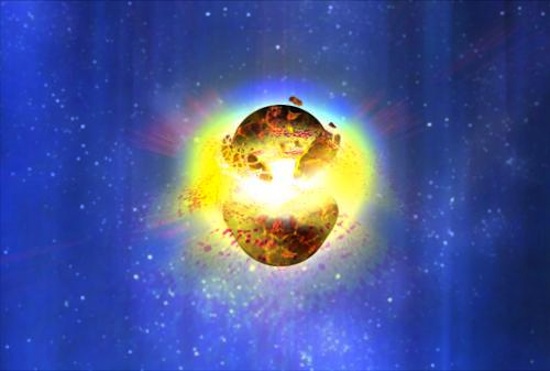 Researchers in Germany think they have pinpointed the cause of low-levels of radiation indicated in tree rings dating from the eighth century — a blast of gamma rays that hit the Earth in the year 775 after two far-off “stellar remnants — like black holes or white dwarf stars —  merged together, causing a release of energy that could be felt from light years away. If that’s true, though, then why aren’t we all Incredible Hulks right now? Explain that, science!

Last year, researchers found higher than expected levels of Carbon-14 and Beryllium-10 isotopes in tree rings formed in 775, indicating that an enormous blast of radiation smacked the Earth around that time. The question is, though, what was the source of that radiation? A solar flare wouldn’t have had the power to leave behind traces this strong, and a suspected supernova spotted in 776 — when a “red crucifix” appeared in the sky — would have been too late.

Now, researchers think they’ve got the solution — the burst of radiation could have been emitted by merger between superdense objects like black holes, white dwarfs or neutron stars. That kind of merger would have produced lots of energy and radiation, but offered nothing in the visible light spectrum, and thus would have left no clues to its happening but those left behind in organic matter like tree rings.

The cosmic event probably would have taken place between three and twelve thousand light years away from Earth, calculations suggest. And if you would like to be totally unnerved for the rest of the day, here’s something that will do the job. According to researcher Ralph Neuhauser:

“If the gamma ray burst had been much closer to the Earth it would have caused significant harm to the biosphere. But even thousands of light years away, a similar event today could cause havoc with the sensitive electronic systems that advanced societies have come to depend on.”

Try not to worry about it too much, though — since this is the only Carbon-14 of its kind spike noted on record, chances are events like this are fairly rare. Just try to think abuot how cool two neutron stars merging is, rather than what would happen if the radiation spike arrived today, or about all the people who probably got burned as witches when this blast of radiation hit. 775 was a simpler time, and folks just didn’t need much impetus to set fire to the least popular person in town in those days.

(via PhysOrg, image courtesy of NASA)