Boobs Had Bras Over 600 Years Ago, 500 Years Before Bra’s Invention

Holy boob revelations, Batman! Bras have long been thought to have arrived on the scene right around the time when women started abandoning their corsets for more comfortable options, but according to recent archaeological finds, women may have worn undergarments remarkably similar to those on the market today–600 years ago.

Archaeologist Beatrix Nutz, who has the kind of name just dying to be adapted into a whimsically intelligent novel or children’s book, made the discovery in 2008 and has just recently been going on a publicity push for her find.

She and her team uncovered four linen bras dating to the Middle Ages while excavating an Austrian castle. One of the brassieres can be seen in the above image, and here’s what seems to be the equivalent of string bikini-style underwear, but from around the time all those Habsburgs started running around: 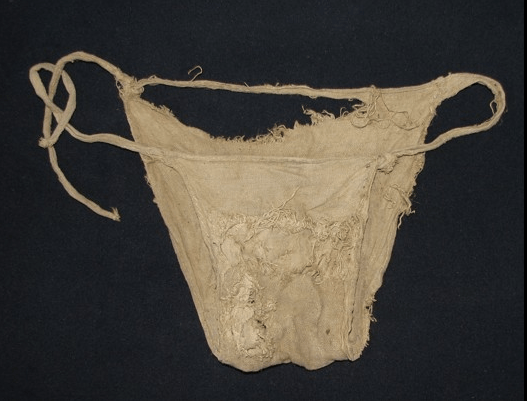 According to this evidence, which Nutz and her team have even analyzed for DNA, bras existed right alongside–and maybe even before–corsets, and maybe not just as something that evolved as an alternative.

Fashion curator of the London Museum, Hilary Davidson, took a look at one of the found garments in particular and remarked that it “looks exactly like a (modern) brassiere.”

So far all we really know is that these things existed, and when, which is already a revolutionary concept for all those underwear historians out there. It’ll be interesting to uncover more of what the conception of these particular pieces of clothing entailed, and to figure out how common they were.

There is another possible answer to all of this, however, that has gone as of yet unexplored: Time Lords.

We’d be fine either way.