NASA Releases Map of the Entire Sky | The Mary Sue 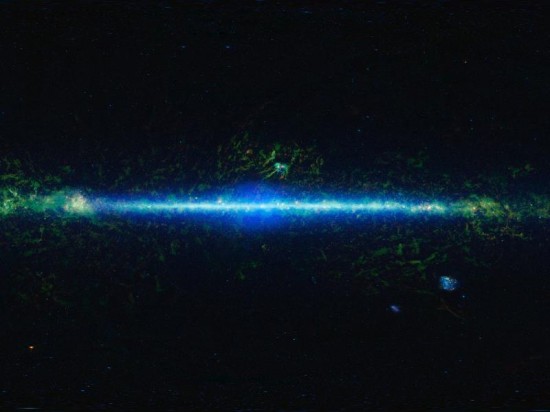 Launched in 2009, NASA’s Wide-field Infrared Survey Explorer or WISE methodically snapped an infrared picture about once every 11 seconds for ten months — totaling around 2.7 million images — in an attempt to compile an atlas of the entire sky. This past Wednesday, NASA released the final version of their all-sky atlas and catalog of objects, which should keep scientists and astronomers busy for quite some time.

Comprising 15 trillion bytes of information, the individual pictures from the WISE probe were stitched together into a collection of 18,000 mosaic images with over 560 million individual stars and galaxies, many of which have never been seen before. The image above is one such mosaic image, showing the entire 360º view of the sky in a single shot.

The hope is that this collection of images and catalog of objects will spur further discoveries, as the head of the data processing and archiving effort for WISE Roc Cutri said:

“It will be exciting and rewarding to see the innovative ways the science and educational communities will use WISE in their studies now that they have the data at their fingertips.”

Though the all sky-atlas is only just now released, preliminary data from WISE has already turned up some startling discoveries. For instance, the first “trojan asteroid” — that is, an asteroid which has the same orbital path around the sun as the Earth — was found using information from the WISE survey. A new class of stars called “Y-dwarfs,” which are the darkest and coldest stars yet seen, were also discovered using WISE data. Information from WISE was also used in a survey of near Earth asteroids that comfortingly found that NASA has already tracked over 90% of space rocks close to our planet.

With so much valuable scientific work already made by the program, it’s no surprise that NASA has high hopes now that all the information has been released. Who knows what startling new finds will come next?

(via NASA, Wikipedia, image via NASA)