And Now, The Winners Of the First Annual Mary Sues 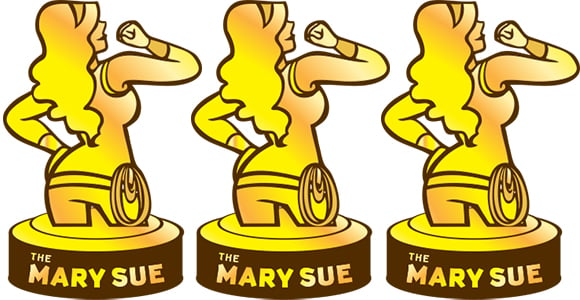 You over the Oscars yet? Over its lack of surprises and its egregious absence of extravagant musical numbers (AMPAS, how can you have Ellen host and not give her a dance number?) and its general boringness? Good. Me, too. We have a much more fun awards reveal for you today: The 2014 Mary Sues, which is like the Oscars, except only geeky films are in the running and for the last month we’ve invited you to vote on the winners.

And we have something the Academy Awards doesn’t have: GIFS.

This one goes to The Hunger Games: Catching Fire‘s Jena Malone, in an absolute landslide with 445 votes.

Sorry, Kat Dennings (second place with 227). Your turn as Darcy in Thor: The Dark World was a bit of splendid, but you might’ve fared better if you’d wielded an axe. It’s a good general rule. The same can be said for also-rans, Evangeline Lilly, Julianne Moore, Natalie Portman, Gwyneth Paltrow, Evangeline Lilly, and Rila Fukushima. Everyone needs more axes.

Speaking of axes: BEST FIGHT. It’s a category the Oscars themselves sadly omit. As a reminder, our nominees were B-b-b-bilbo and the Dwarves vs Smaug, Katniss vs The Man, Mako Mori vs Otachi, Pepper vs the Mandarin, Superman vs Faora, Wolverine’s bullet train brou ha ha, and Tauriel vs The Haters (note: that category does not include people who just plain don’t like Tauriel. That’s fine. Different strokes for different folks. I’m speaking of the people who went into the movie determined to hate everything about her due to misplaced Tolkien purism).

This one was close, with a substantial number of votes going to Katniss, Pepper, and Tauriel, but the clear winner is Ms Mako “For My Family” Mori.

Don’t be sad, Katniss. You still have two more movies, and who knows whether that Pacific Rim sequel will ever actually happen.

Hiddleston became the golden boy of the first annual Mary Sues by taking home a second award, that of Best Villain. I consider him a villain in that film, if not the villain, because of that whole taking-over-Asgard thing. But some people commented that his role in Thor: The Dark World was more along the lines of a sidekick than a baddie. As an olive branch, we’d like to give a special mention to the runner-up in this category: Gravity’s terrifying blackness of infinite space, which earned 171 votes to Hiddles’ 476.

Pacific Rim’s Kaiju and Frozen’s surprise villain tied for third place at 160 votes. The Cumberbizzle racked up 143 and 104 votes for Smaug and Khan, respectively. And Iron Man 3’s Mandarin (the real one or the fake, we’re not picky) and Man of Steel’s Faora pulled up the rear with a mere 43 votes apiece. Looks like Faora being the best part of her movie wasn’t enough to undo the stink of it…

… being the Biggest Disappointment of 2013, at least according to our readers.

In any other year Star Trek Into Darkness (258 votes) would’ve owned this category, but… Zack Snyder. 331 votes. World War Z came in third, with Elysium, Beautiful Creatures, The Mortal Instruments: City of Bones, and Hansel & Gretel: Witch Hunters not getting many votes at all. Probably because, with the possible exception of Elysium, not many people saw them.

But let’s get back to accentuating the positive: Best New (To Movies) Female Character of 2013. We had some awesome ladies in this category: Tauriel, Johanna Mason, Gravity’s Ryan Stone, Frozen’s Elsa, Yukio from The Wolverine, and Mako Mori. Who won?

BOW BEFORE YOUR QUEEN.

Mako handily won her second category with 361 votes to second-place finisher Elsa’s 252. Winning the metaphorical bronze was Johanna Mason. When reached for comment, her response was: “Well you know what? F*** THAT.”

Unfortunately for fans of ladies piloting giant robots, Mako Mori/Rinko Kikuchi was not able to pull off a third victory. The Best Lead Actress category was neck and neck between her and Catching Fire‘s Jennifer Lawrence until the very end, when Lawrence surged ahead to claim a victory that she should really appreciate much more than last year’s Oscar.

But things were even more tense in the Best Lead Actor category, which was determined by a mere THREE VOTES.

Robert Downey Jr for Iron Man 3: 279
Martin Freeman for The Hobbit: The Desolation of Smaug: 282

Marvel Studios took back the crown in the Most Anticipated Genre Movie of 2014 category, which Guardians of the Galaxy handily won with 248 votes.

Quick note on this category: It’s the only one that we included a write-in option for, and several votes had to be disqualified for not being a genre movie or not being a movie at all. All this is to say: The vote for “Sherlock Season 4” was DQ’ed, but God bless the optimistic soul of whoever cast it.

And for the finale: BEST GENRE MOVIE OF 2013. Drumroll please…

It was an easy peasey victory for Pacific Rim, which handily defeated runner-up Frozen 283 votes to 216. Catching Fire was a close third at 211 votes. Maybe the fanbase for those two movies is so close that the vote was split and Frozen and Fire ended up canceling each other out.

We had fun with this, you guys! I hope you did, too. Feel free to vent your spleen in the comments about what did win, what should’ve won, and how amazing Lupita Nyong’o was at the real Oscars.