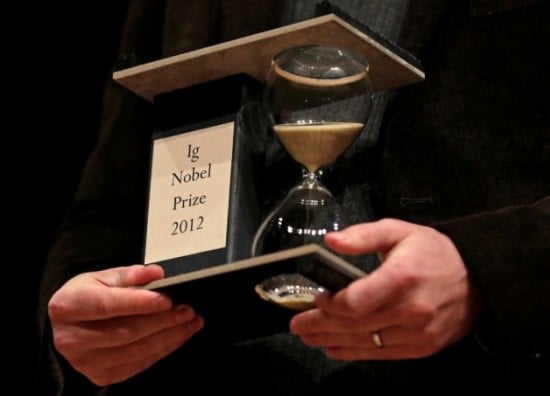 Yesterday marked the ceremony awarding the 22nd batch of Ig Nobel Prizes for the goofiest, strangest, and altogether most fun inventions, studies and pieces of scientific research of the last year. The awards were presented at Harvard University by the magazine Annals of Improbable Research to 10 researchers whose work ranged from developing the SpeechJammer, a device that disrupts a person’s speech patterns by playing their own voice back to them on a slight delay, to research into why coffee spills when you’re walking with it. Keep reading for video of the entire awards ceremony.

Other winning research this year included research into the physics of ponytails, a study on whether or not chimpanzees are able to identify one another simply be seeing a picture of each other’s butts (they are!) and a paper consisting of a host of helpful tips for doctors performing colonoscopies on how to prevent their patients from exploding, which even those of us who are not doctors can imagine is a really rude and frustrating thing for a patient to do while being operated on.

This year’s Ig Nobel ceremony also offered the prizes a chance to correct a longstanding mistake on their part, awarding a long-overdue 1999 Ig Nobel to physicist Joseph Keller. Keller was a co-author on the 1999 Ig Nobel winning paper that calculated the optimal method for dunking a biscuit into a cup of tea. Conveniently enough, Keller was already on hand to accept this year’s Ig Nobel in Physics for his latest hot beverage related work, a method for designing a tea kettle that doesn’t drip.

You can check out the entire awards ceremony below, though, in truly Ig Nobel fashion, the video starts significantly prior to the actual event. Skip to 48:00 or so to see the event actually kick off, though if you watch the whole show, you can see people doing some truly unnerving work with a number of frog puppets.